- May 28, 2010
The Smithsonian's Arthur Sackler Gallery had the most amazing room set up as a Tibetan Shrine.

I found this image on the "ReadyDC" site and shows more than the postcard I picked up: 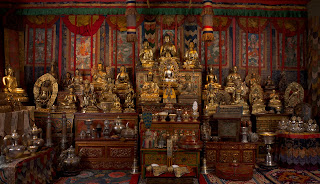 Source: Sackler Gallery (according to the ReadyDC site)
Click on it for the full size because it is truly gorgeous -- and this is just one wall of three walls packed similarly.

The walls were lined with thangkus, paintings that could be rolled up like a scroll and transported which Tibetan monks apparently did a lot of. On the wall to the left, which you can't see in the photo, they had rows of Gaus, which are box-shrines basically.

I pored over the catalog (weighed a ton and cost a lot so I didn't buy it), stood and just soaked this in ... they were playing chants in the background, lovely and meditative.

And I thought, I could do this ... [if we just ignore the whole appropriating culture stuff. I see this as being inspired by the artwork] Not an entire room, perhaps (or maybe?!) but I could certainly make use of those Marvelous Madonna Montages and put them together like a thangku (unfortunately you wouldn't be able to roll them up, but I could use the fabric surround and the silk hanging that they used to cover it up when traveling or not a holy day--the covering would protect them in this horrid SoCal sun.

But first, I have to iron a bunch of hankies. I have plans for them this weekend, which hopefully I will get to do in between helping with hubby's idea of a long weekend project: repainting the guest bathroom. I have offered to paint leaves around the mirror's edges...
25 days