Liner for my grocery cart

- August 09, 2010
I walk to the grocery store/supermarket to do the week's shopping and eventually my in-laws took pity on me and bought one of those carts. (It's only three blocks.) For a long time I wanted to make a cute liner for it, but as I keep saying, my sewing skills aren't that hot.

They are apparently better than they used to be.

Here's the cart before, with the reusable grocery bags. 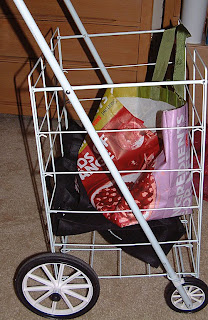 And here is after. This liner is 100% handsewn. 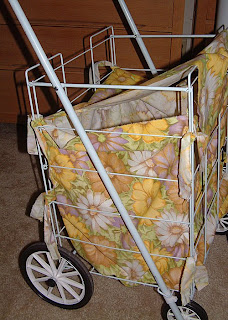 The fabric is a portion of an old bedsheet that I'd discovered still in the chest of drawers (which you can glimpse behind the cart) after we'd brought the bedroom set home. I added a "lid" which I thought might do a better job than the dark grocery bags in reflecting heat. 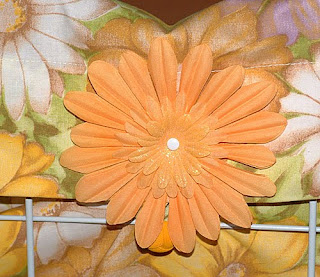 Of course I had to add a flower to it -- daisies, naturally. The center one is glittered. The brad holds the flower together and then the bottom two layers are sewn onto the edge of the liner lid. (which is the top hem of the bedsheet.) 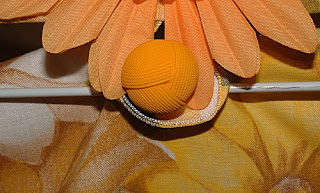 I found a bright yellow button in my button box and so the whole thing closes with that and a blue and yellow gingham wired ribbon.

Not bad for someone who can't sew, eh?

I guess I shall have to stop saying that. But we'll see how this holds up to the wear and tear....
sewing