- January 07, 2011
Last week, my planned workday went to h*** in a handbasket (hey, I work in a church, remember?). The priest's vesting room stunk to high heaven of mold/mildew from the recent downpours, the carpet had been soaked in one place, and my hubby recommended we get the vestments outta there before the mold/mildew spores transferred as we knew the smell was coming from somewhere.

So we start hauling out vestments and transferring them to a couple of other closets....they were dry and untouched (and not smelly, apparently I have a nose for it) ....

But found that we had a pile of mildewy clothes on the floor of one of the closets, and the wet had wicked up from these.... Alas, two gorgeous black wool cassocks were completely ruined with mildew up to the knees. I have a bad feeling that can't have occurred in just the last couple of weeks and that this has been an undiagnosed problem...

Fortunately, the vestments currently in use were spared and weren't even damp, but there were some old red child-sized choir robes (that hadn't been used in 15-20 years) and a few Christmas pageant (we think) costumes. We didn't look too closely as most of them were the items on the floor, except for 3 pieces that were still hanging.

One of the mystery items was a floor-length under-petticoat which had gathered ivory lace starting at the knees. It came with this absurd pink satin and lace giant bow, so I suspect someone, sometime, had been an adult-sized Little Bo Peep. Or something. 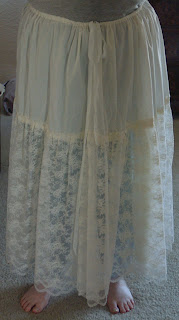 As it's without the rest of its costume and we didn't otherwise have a use for it at church, I've taken it home, had it washed, and hung in the downstairs bathroom for "observation". I waited until after the second rain storm to do another check of it, and as it smells okay and there's no "bloom", I've just gained myself an underskirt to wear with some of my shorter skirts, like the dirndl underskirt I bought in Munich.