Artful Pages class: have you signed up?

- February 18, 2011
I first heard about this class while I was away in Australia. I've taken classes from Hope Wallace Karney and Mary Green before, and I think Lisa McIlvain taught in Mary's "Garden Party" (I think it was called) combo workshops last year, so I'm very excited to learn more from each of these gals and discover a new (to me) teacher: Lenna Young Andrews! 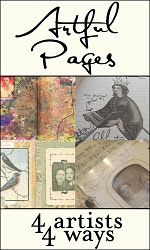 Class starts February 20, so it's not too late to sign up too!

I still have classes ongoing: Natalie Neumann's "Mori Cupcake" is wrapping up soon (sooner than I'd like, it's been a wonderful, affirmative community), and Suzi Blu's "La Sirena" class remains open until May -- which is good because I have about three paintings I still need to complete. Am working on the face for the next painting, which I have sketched out the layout.
art