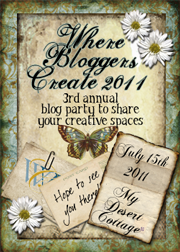 Not much has changed in my art room since last year.

I had a substantial to-do list this year and I didn't quite get to all of them. Here's what was on my "to-do" that got t'done:

1) I made pretty labels for my binders: 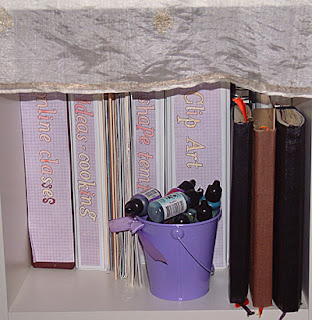 2) I cleaned out my closet. (There is no before picture: just imagine stacks of boxes, giant plastic containers and the like.)

The closet now holds some stamp storage (off to the side behind the purple velvet dress that's hanging; a chest of drawers packed with fabric (now consolidated into one space except for another drawer in last year's pink chest of drawers); and a sacred space. 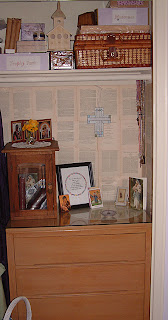 The wall has book pages taped onto it. I got the idea and the technique from Aunt Peaches.

Eventually, the small stained glass cross will move and be above the ombry that I have on permanent loan (currently holding my prayer books and a bible), which is a bit of a long story, but basically when I no longer have a use for the ombry, I have to give it back. It smells of rosewood inside, and I think really was an ombry (place where the sacrament is kept).

Anywho, the cross will probably be replaced by the icon I'll be making in August. It's a proper icon writing workshop using ancient techniques and lots of prayer. I'm really looking forward to it. 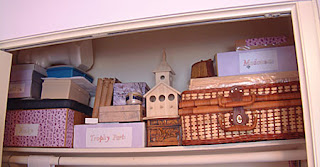 I made labels out of pretty paper for the boxes so they'd be more pleasing to the eye. (And I'd know what was in them without having to fetch them down.) 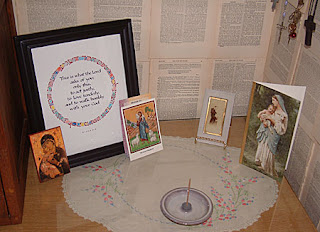 The quote is a calligraphy piece by an Order of the Holy Cross monk and is from Micah, and the small image second from the right is this really old saint card -- made of glass and celluloid, I think, that I found at an antique shop in Omaha two years ago. Now I have the right space for it. 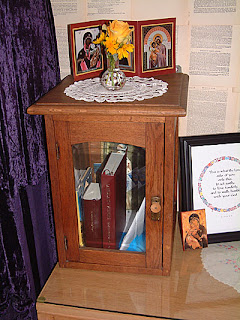 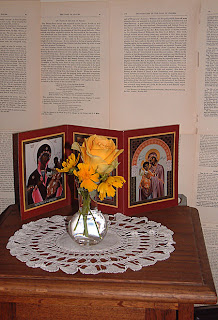 The closet also holds my small collection of crosses and rosaries. 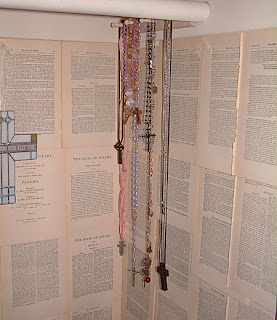 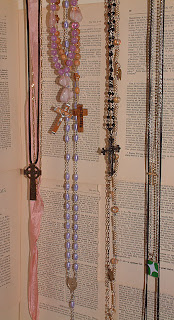 The broken closet door is still broken and currently residing on its side in the guest bedroom. I suspect it'll eventually make its way out to the garage, because really, I don't need to hide what's in the closet any more.
I didn't paint the chest of drawers, nor the tall jewelry cabinet that actually holds pens and other bits, nor did I get around to making a table skirt for my desk, but at least I cleaned it up. 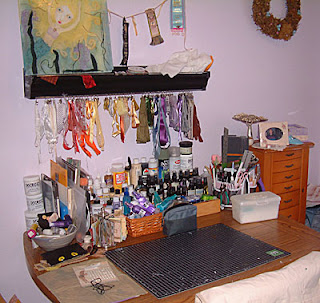 I did do a small purge of magazines ... and took care of the stacks of recipes and cooking magazines that were on the floor of this room!
Here's what else is new about the space since last year.
Already blogged about: my "inspiration board" bird cage that I set up for Suzi Blu's La Sirena course. (And I finally have a place to put my iHome with iPod!) To the right, salt and pepper shakers holding various kinds of glitter surround a Mary statue. 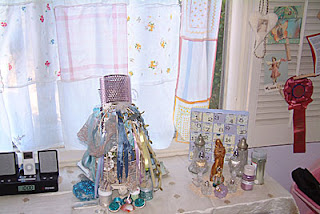 The hurricane lamp I was having issues with now lives here: 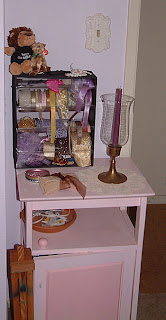 I was really nervous about putting it in a closet that had loose paper on its walls. Can you blame me?
The other new addition (which was not on my to do list) is this jewelry box: picked up as plain wood at Michaels, which I painted, sponged and stamped French words onto. It now holds the bling where I can see it! 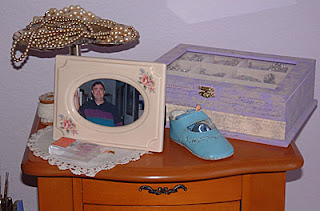 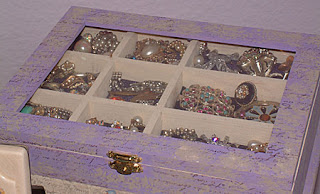 Oh and this is where the moss wreath I made for the High Tea ended up: 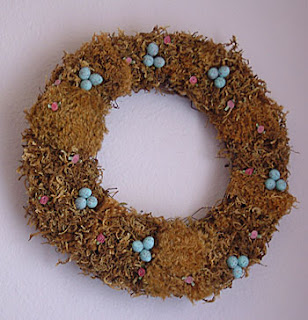 Oh hey, remember the curtains I made out of hankies last year? I was having difficulty taking pictures of them because they are rather sheer and the sun comes through them. I finally figured it out. Photograph 'em at night! (Then there's only the flash flare to deal with. Ahem.) 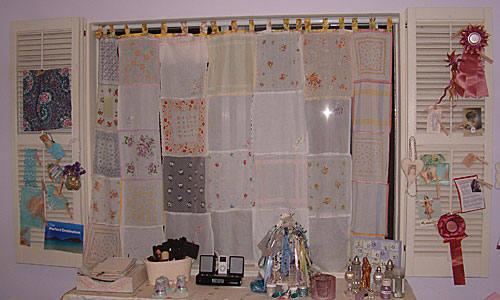 You can also see the shutters on either side: on the left hand is an extension of the La Sirena inspiration, and the right hand side is just cute stuff I've found or received.... 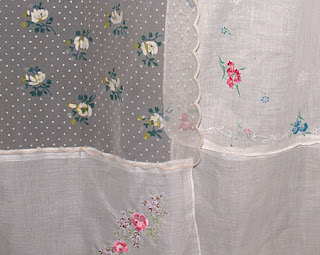 I have a whole stack of hankies recently unearthed and so I'm thinking of making an "all white" curtain with embroidery on it. However, I've been thinking this for a while, so don't hold your breath for next year's blog party... ;)

Here are more pics, much the same from last year: 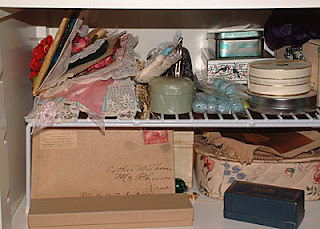 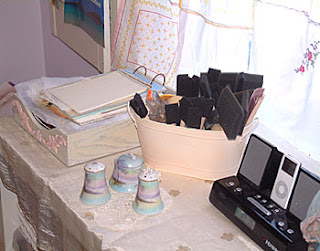 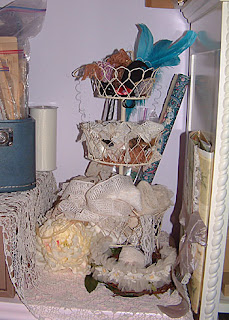 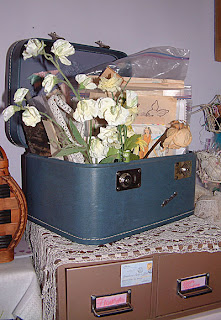 (The blue case is a lot more stuffed than it was last year. I'm trying to use my good stuff, really!) 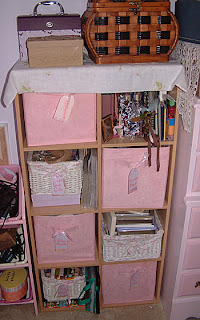 Finally, some of what I do art-wise has changed, is changing. I am pretty sure that it is all part of finding my artistic voice. But since the class I took from Suzi Blu, I am more confident about drawing and really enjoyed making mixed media paintings. You can see the two paintings I've done so far, in the photos below. 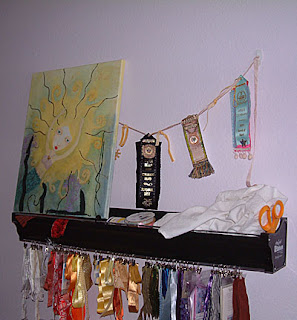 I was part way through Suzi's course when I realized two things. First, this kind of art really gets at what's going on in your subconscious/soul; and second: that I can incorporate my faith into my art (even when they are mermaids. I started a "Wednesday's Where's God" to explore this in art journal format (which has been fairly basic thus far but is creating a good habit).

Thanks for coming to see where this blogger creates! I'll be checking in regularly, so if there are any questions, just holler!
where bloggers create