- September 02, 2011
There's a lot of bird life in Mum's backyard (back in Australia),  mainly because of the gum trees (aka eucalyptus) on her property.  This is just one of them. 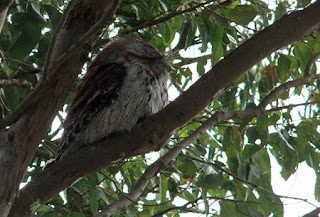 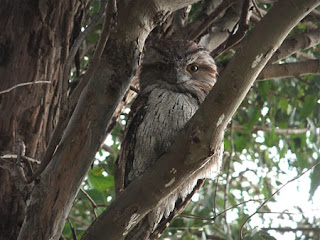 It's a tawny frogmouth owl. Yes, and it's eyes were open during the day. It moved from one tree to another and took us a couple of days to find it in the new tree. Isn't it cute? (Ok, the staring right at the camera in a "you're disturbing my sleep" annoyed kind of way, isn't quite so cute... but it's not a very big owl.)

Their feathers and coloring make it very hard to spot.  Don't believe me? Check out this video I shot of it.

Took me ages to find it via the viewfinder.

(And the answer is, it's in the bottom left corner ... at least until I managed to find it). It's moved on from this tree too and Mum hasn't found the new location yet.

Maybe it got tired of getting looked at and having its photo taken.

When I was visiting Pop in  hospital, the old man in the bed opposite heard us tell Pop about the owl and he beckoned me over and I got a bunch of cool bird-lore -- like where there's one, there's two and the other is nesting somewhere in a tree nearby. Couldn't see that one though (assuming I've seen the same one twice...)

Each morning I was woken up to birdsong (including one particularly piercing shriek from an unfamiliar bird) and I recorded it via my iPhone, but I'm afraid they didn't come out very well. Am going to try and see if I can up the levels or something ...