- December 26, 2011
The plan was to redesign this blog and reboot it with its new focus.

Funny thing is, the pieces started fitting together differently. I woke up in the wee hours of the morning in the week before Christmas with an a-ha.

What I was planning wasn't exactly what God was planning. I knew that there was something more, something different, but I couldn't quite figure it out. Honestly, I still don't have it figured out. But I have another part of it... which requires consultation with the usual suspects and some more working out.

So in the meantime, I did promise I'd be back this week, so here is a painting I finished recently.

It's the last assigned painting assignment from the La Sirena class from  Suzi Blu that I took last year. She extended the critique time to May of this year, and I swore that I would finish this class before the year's end. 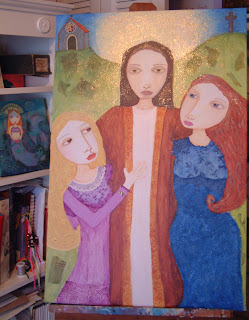 However, it didn't quite come out as I planned. It was supposed to be head-to-toe figures with a good-sized background. I drew the faces so big that sketching out their bodies I realized that wasn't going to happen. I had a choice, scrap the faces and start over with smaller faces, or go ahead with the painting.

It's based on the verse from Corinthians about faith, hope and love. The guy in the middle is Jesus (I haven't figured out how to do beards yet.) I wanted to include figurative illustrations of faith and hope but there was no room. No more than a heart on a sleeve, anyway.

It's the biggest painting I've done so far (that's why you see the shelves to the left, so you have an idea of the size of this thing). I have no idea where to hang it either. And I plan to do another gigantic painting the way I envisaged it in my head.

Maybe I'll sell it at the church fair next year. Maybe. I mean, it's newbie work. A year ago I couldn't draw a face. A few months ago they looked like sulky aliens. They still don't look quite right.

So I dunno. What do you think I should do with it?
painting suzi blu