Making The Sacrifice of Silence...

- March 14, 2012
Silence, for me right now, is both a sanity-saver and a sacrifice. I struggle to be silent before God.

Part of my Rule as an Associate of the Order of the Holy Cross (AHC for short, thank goodness!) has a section on cultivating silence:


Personal Prayer
I need to spend time in silence with God. I would like to have quiet time every day. Three times a week, however, appears to be workable.

Yeah, my Rule is a bit informal in style. The first version was epically detailed, the 2.0 version got a little more concise, but still chatty.

My current practice is to head to the church sanctuary and take a seat in a pew. I set a timer (the Equanimity app) and close my eyes. I usually start out with the Jesus Prayer (I pray a slightly different version which I will blog about sometime!), breathing consciously, and being aware of my body. And then I try to stop my babbling mind from, you know, babbling.

Which doesn't always work, probably because I'm trying to rush things. Often my thoughts go like this:

And it's almost like an exasperated sigh: "Be present."

"Oh! Oh yeah. Where am I? Hey, feet, how's it feeling down there? Are we anchored? This pew needs more padding."

"Right, right. Relax, be present... How much longer before my time's up?"

And I usually peek at the timer before it runs out.

So, silence, I thought, is really hard.

But then I got to thinking. I mean, my internal conversation doesn't sound like I'm longing to spend a ton of time with God, even though that's what I long for. So why do I have this drive to find silence?

Because while on retreat, silence is the space where I found God: as an insight, a lightning bolt, His love, the comfort of His presence.

During Diurnum (noon day service) at the monastery at West Park, NY, there was silence right in the middle of the service. And after the first disconcerting time, my mind began to still. Not "feel" God, but feel the souls of the community around me: monks and guests. I was even starting to get the hang of it by the end of my week there.

I think that's where I got the idea it had to be inside, in a church, although I have sat on a couch and attempted it.

The why of being silent was being connected to God.

So why wasn't it working when I wasn't on retreat? I looked at where I am silent on retreat and in my life.

On retreat at West Park, it's been Diurnum, the silent cloisters, the Great Silence from Compline to after breakfast. At my last retreat in Santa Barbara, left to my own devices with only a couple of other guests around, I spent most of it in silence, except for services, meals, and a daily phone call to Dan. Oh, and I chatted with Br. Tom on the last day.

Like first thing in the morning, before Lauds (morning prayer), I grabbed a mug of tea and took it out onto the patio that overlooks the Santa Barbara hills and listen to the birds and morning traffic. And just be.

And the time, on that visit to West Park, after working all day in the monastic library, reshelving and cleaning, that I grabbed a mug of tea and leaned on the balcony near the refectory and watched the Hudson River...

I complained that there was no lightning bolt, no clue by four, no overt presence of God, but a sense of calm and rest and contentment ... and God was in that too.
And so, I have discovered that it's not what prayer I say, not what cup of tea I have in my hand. It's taking the time to stop, to listen, to be.  A monk-led silence helps that, a cup of tea while waiting for the Lauds bell to ring helps that. 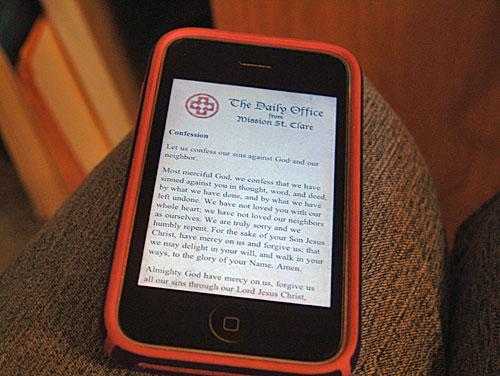 If I review my day, I'm silent on the bus (except for the rare conversation and I'm usually spending most of the trip in praying Morning Prayer via the Mission St. Clare app), when I'm walking to/from work, and aside from the occasional nattering to the dogs, quiet at home until the husband gets in from work.
The silence isn't about silence. It isn't about stilling the mind to hear answers from God. The challenge of silence lies in being present in it. Not lost in daydreams, pondering about work, wondering if I remembered to defrost the chicken, or if the dogs are sick again ... or playing Angry Birds.
It's about being intentionally present in the presence of God. I think that's the heartfelt desire ... and that's the challenge ...
As for the sacrifice: it's to stop thinking of dinner, work, to stop wasting time with games.

I clutter my thoughts with things other than God. Who is amazing and who loves.
I struggle with letting the clutter go. And that's a sacrifice.
One worth giving.

I am linking this to Ann Voskamp's "Walk with Him Wednesdays".