"where there is discord, harmony" 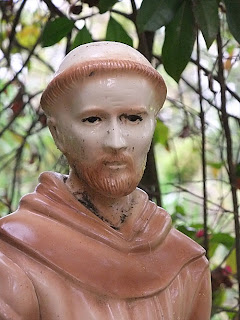 Today's guest post in the Prayer of St. Francis series is by Lory Garrett. Our paths crossed a few years back and we walked in faith together for a few years before she moved (she taught me how to make psanky eggs amongst other things.)
“Don’t be such a troublemaker, Lory!”  “Can’t you ever just get along, Lory?”  These are the words I grew up with.  Even my 7th grade English teacher’s favorite phase to me was “Don’t be so dogmatic!”  I didn’t even know what that meant (except it couldn’t be good) until I looked it up.
Now, in my 65th year, I often still find myself the lightning bolt or the lightning rod.  I don’t mean to be.  I don’t mean to be a troublemaker.  I do want to get along.  I don’t mean to be so intense when I express something important to me.
Leanne’s flattering request to guest on her blog hit just at the right time.  True enough, I’m not a fan of St. Francis’ Peace Prayer.  It overwhelms me with my failures.  Particularly “where there is discord, (let me sow) union.”  But I needed the head’s up:  it was time to deal with this issue…again.
So began my Google quest.  There are a multitude of versions out there.  Some don’t even contain the line.  Some read, “Where there is error, truth.”  But then I found the version used in the title of today’s blog:  Where there is discord, harmony.  It struck a (pun alert) chord.
I won’t go near international (wars, uprisings, etc.), or national (politics, immigration, etc.) discord.  People smarter than me have written books about these things.  But there’s a lot of discord closer to home.  So often I add to it.
I need to learn the harmony.
I need to listen, really listen to another’s song.  When someone asks a question, are they really asking “that” question, or do they just want reinforcement for the answer they’re comfortable with?  When someone stands rigid against a change, are they really fighting “that” change, or is their whole life in turmoil and they need the constant?  Or do they see change as a denouncement of them and what’s always been done? When someone fights something new, is it really the “new” or are they afraid of being left out or behind?  When someone pushes an idea relentlessly, is it because they see no other way, or because acceptance of the idea is acceptance and acknowledgement of them?
I can’t know all the answers to these questions. But I can listen to God, striving to hear the grace notes. My voice can be softer, kinder. My statements, clearer and and gentle.  I don’t have to hear every disagreement as a rebuke; rather I can hear it as an invitation for exploration.  I don’t have to sing the same line.  I just need to sing the same love song.  I can, with God’s help, make the song fuller and richer.
And so I begin…again.  Bring on the music!