"where there is doubt, faith" - Prayer of St. Francis series 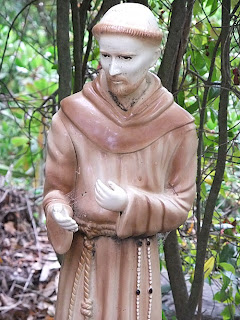 Today's guest blogger for my series on the Prayer of St. Francis is Sarah Kidd.
Sarah is currently finishing her second year absorbing the language and culture of South Asia. When not sipping chai and chatting with the neighbors, she's sipping chai and reading good books and blogs. She writes about her adventures at Whispers on the Journey (www.sarah-kidd.com).

***
“I’m leaving,” she said. We were best friends one semester away from graduating Bible college. Her doubts made her feel a hypocrite in classes about theology and Bible. I would graduate without her.
We had cried together. We had talked God’s goodness and the problem of evil until our brains turned to mush and our voices hoarse. I had spent long, sleepless nights tossing, turning, praying. I had wished desperately that somehow I could believe enough for the both of us.
She began dating a guy who hated Christians. Mocked them relentlessly. I read his scathing, angry blog. I tried to understand where she was going.
I was taking a class in apologetics – the art of defending Christian belief and doctrine. As we dove into class discussion of the vitriolic The God Delusion by Richard Dawkins, I struggled to keep my head above the waters of disbelief. Hemmed in by the voices of doubt, they sucked me under.
Cramming homework during my train ride to church, I pulled my head up from Dawkins, terrified that he had just proven there is no God. “That’s in then,” I thought. “He’s proven it. What am I to do now?” How will I explain to my parents I’ve suddenly concluded the beautiful faith they raised me with cannot stand? How will I reverse the entire course of my life in a single moment? On what will I rebuild?
Just as quickly as the waters closed, they receded. I found enough holes in his argument to keep my fingernails dug into faith until I could lay hold of a debate between Dawkins and John Lennox. I read CS Lewis’ Mere Christianity until I could face my Bible again. I sucked up the class discussion and dogged my professor to his office after class. I confessed to him that Lennox and Lewis had probably saved my faith. He looked at me, paused, and quietly confessed Lewis had done the same for him.
We stood there, silent. Two souls who know what it is to have someone believe enough for you until you can believe on your own again.
I don’t know where she is, my friend of the difficult semester. We still talk, but it’s more about our post-college jobs, her adventures in online dating, and mine in the curried world of South Asia. It’s been a long while since we discussed God’s goodness or the problem of evil. These topics just don’t come as readily outside the world of Bible college and existential crises.
Her Christmas card said something about my being a “bright presence” to her and I wonder what that means.
Am I still believing enough for her too?