"it is in pardoning that we are pardoned" 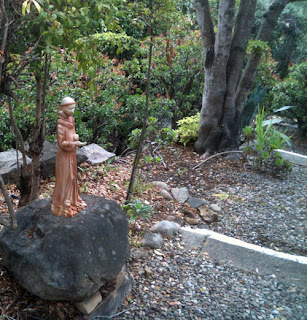 We continue the series on the Prayer of St. Francis. Our guest today is Mary. She is a thirty something Catholic woman who enjoys gardening, swimming, and verbal sparring. She lives in a nondescript small town with her husband and two elderly cats. You can find her blog at St. Henry.

Several years ago, one of my friends was killed by a drunk driver.  To protect his family's privacy, I'll call him Jacob, but that's not his real name.  Jacob had done some dumb things when he was young, but he turned his life around in a major way, had a family he adored, and was committed to being the best man he could be.  And just as it seemed that everything had come together for him, it was all over.  "Unfair" doesn't begin to describe it.

Those of you who've lost someone suddenly know the hurricane of emotion that swirls around you during those first few days.  Shock. Pain. Sadness over what that person was and the dreams they never fulfilled.  And anger.

If you know me, you know I'm the Queen of Grudge-Holding, and it will probably shock you to hear that I don't hold a grudge against the drunk driver who killed Jacob.  It certainly shocks me to think that; this person is probably the one person who I really have a right to be enraged with, and yet... I'm not.

It very nearly went the other way.  A day before Jacob's funeral, I had made my way past the initial shock and into the anger stage.  I wanted to make that drunk driver hurt like I did.  I wanted to beat the living daylights out of him.  I wanted to scream every curse I knew at him, to salt his fields and poison his well, to destroy something he loved as much as I loved my friend.   I wanted him to know what he had done to this man's wife and children and parents and siblings and friends and coworkers.  I wanted revenge.

But something stopped me.  It was one of those moments that Oprah would call an "aha moment," and what I now know was the intervention of the Holy Spirit, although I didn't see it that way at the time.

As I was having my "crush your enemy and see him driven before you" fantasy, I suddenly had a vision of what this would do to me.  I saw myself becoming into a bitter old woman before I even turned 30.  I saw myself alienating people, giving myself an ulcer, and driving a wedge between myself and Jacob's widow.  I saw that anger and hate did not honor Jacob's memory; for all his faults, he was (and still is) one of the kindest people I've ever known.  Worst of all, I saw that Jacob would be disappointed in me. A lifetime of hating that drunk driver would not bring Jacob back.  It would accomplish nothing other than adding to my misery.

I closed the door on bitterness and hate.  Every time I found myself starting to get angry at the drunk driver, I'd find a way to stop myself. I'd remember the type of man Jacob was and that revenge did not honor his memory.  Eventually, I thought about the guilt that the drunk driver must walk around with, how it must eat at him every single day.  I still can't find it in my heart to feel sorry for him - after all, he chose to drive drunk.  But I can tell him that his sin is forgiven, and he can go in peace.

And that's how I know that in pardoning we are pardoned.  By pardoning this man, I also pardoned myself from a lifetime of anger and alienation and regret.  Because I pardoned that man, I can focus on the way Jacob lived, not the way he died.  And maybe I gave myself the capacity to pardon a few other people I've been holding grudges against.

I still miss Jacob a lot, as does everyone who knew him.  I think he's a lot happier with the way I honor his memory now than the way I would have tried to do so had I continued on the bitterness track.  I hope that when I get to the pearly gates, he'll be there and just as glad to see me as I am to see him.  And I know that when I arrive, I'll have a much more interesting story than having spent my life on revenge.

"For as you judge, so will you be judged, and the measure with which you measure will be measured out to you" - Matthew 7:2