"body and soul and spirit" in "grace for the good girl" 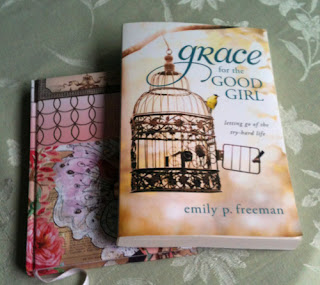 "grace for the good girl" by Emily Freeman is a book I would heartily recommend to anybody who needs to please, who is a Martha rather than a Mary, who identifies with the prodigal son's brother more than the son.

In fact, I finished reading the book and immediately handed it to a friend on retreat with me as I recognized that we shared some of the same "masks".

Even so, I struggled through Emily's interpretation of two pieces of scripture. I even ended up emailing her to ask about it. (She very generously replied with some links.) I did find my way to the same point she reached, so I was able to finish the book.

Also, I want to point out: this is two bits of scripture out of the many Emily refers to in this book. I don't recall any problems with the rest.

If Emily's interpretation worked for you, you don't need to read on. I am not saying she is wrong. I'm saying that my theology (built via my background and study) couldn't hold it. I am sufficiently post-modern enough to recognize that there is more than one way to interpret scripture.

First, my background, for those of you who don't know it. I'm Episcopalian (which is a liturgical church that traces it's splitting off from the Catholic Church to the Reformation and King Henry VIII). There's a certain worldview/theology that many Episcopalians hold (given that the House of Bishops just voted on approving same-sex blessings as I was writing this on a Monday, that might give you a clue as to where it's at). I've also completed a four year course called Education for Ministry which is put out by a seminary in Sewanee for lay people.

Second, I wouldn't be reading "grace for the good girl" again as part of Emily's read along, if I did not think it revealed much about giving up this trying to be perfect and instead having Christ living within us to guide us. It's a powerful message. I'm writing this in case anyone else tripped over this part of the book and stopped reading. If you did, you need to keep going.

Third, in going through this process, I recognized an amazing God-gift. Emily and I interpreted the scriptures differently and yet we both ended up at the same larger-than-both-of-us truth. That blows me away.

Chapter 10: the Fall and spirit (Genesis)

The first time I read this book I was on retreat at a monastery so of course I hit their library to find commentaries on this passage that might share Emily's interpretation. The second time, I was at home with the New Jerusalem Bible (heavily footnoted) and the New Oxford Annotated New Revised Standard Version of the Bible. Plus the internet and my EfM course material.

Emily talks about how God killed the spirit in Adam and Eve as part of the Fall in Chapter 10 of her book. But I couldn't find a reference in this Genesis story to a death of anyone's spirit.

If anything, despite God warning that they will die, God stays His hand. His curse describes the consequences of eating from the Tree of the Knowledge of  Good and Evil. He kills another creature to provide clothing for them and he expels them from the Garden of Eden, but they are not killed.

Our God is merciful.

That conclusion was the first step in helping me join Emily in her conclusion in her book.

Emily's concepts about this phrase were new to me also. I hadn't read Watchman Nee or Dudley Hall or Lynne Hybels to name a few of her resources in the back of the book. So what did the books I had read say about this verse?

I looked up the footnotes in the New Oxford NRSV. It concurred with my EfM material: that this phrase probably meant "the whole person" as it's a bit of literary parallelism with the first part: "...may the God of peace Himself sanctify you entirely..." (translation used in "grace for the good girl".)

The New Jerusalem Bible agreed and then went deeper. It looked at the Greek words Paul used to describe soul and spirit.

psyche - translated as "soul", that which makes us a living being. (Emily describes this as the ability to think, feel and choose. In Romans 7:25, Paul uses the Greek word nous for human reason and the mind.)

pneuma - "spirit." Either "the divine presence in a human being, giving new life in union with Christ...; or more probably as the innermost depths of the human being, open and awake to the Spirit" (pg. 1955, New Jerusalem Bible). Emily says this part of us is the invisible connection to God, which is another way of saying the same thing.

But, in "grace for the good girl", our spirits have been dead since Adam and Eve (see Chapter 10 notes above) and when we admit that death and "receive the One who is Life" (pg. 132), then we regain this connection to God. This doesn't sound like "open and awake."

It turns out that whether the spirit is dead or awake, it doesn't really matter, because with either state, we make a choice.

This connection to God is not dead as has been shown throughout salvation history in the Old Testament: Abraham, Jacob, Rebecca, Job, Samuel and all the prophets; and in the New: Elizabeth and Mary before Jesus' birth. Were their spirits dead? To speak to God (or one of God's messengers) would suggest that this connection be open to God, else how would we hear?

Paul argues earlier in Romans about the righteousness (or faith) of Abraham in God's promise to Him. Those who heard God's Word spoken to them all believed, all had faith, all trusted in the Lord their God. Paul goes on to say (eventually) that now that we have new life in Christ, we have been acquitted of our sins as well.

And yet as Christians, Emily, myself (and you, if you're reading this because you've read "grace for the good girl") have either forgotten or ignored that we don't have to earn this acquittal and this is what we have to admit.

The freedom to choose

What happened as a result of the Fall is that Knowledge gave us an awareness of choices, morals, if you will. So do we choose to obey God by listening to the Spirit via our spirit, or do we make the choice that we are enough, that this is all on our shoulders? Do we choose the spirit or do we choose the self (what Emily calls the soul)?

And with that question we can rejoin Emily at the bottom of page 132, not even halfway through chapter 11!

It's always been a choice, and it's a choice that throughout history, we haven't always been successful in keeping. But making that choice, surrendering to the Christ within us, means no more masks and lightened burdens, although it's not a one-off choice, but one we need to continue to make, recognize and remember and ... well, read the rest of Emily's most excellent book, "grace for the good girl".
#graceforthegoodgirl grace for the good girl