Being eye-balled by a bee...

Last week, while on retreat, I got stung by a bee-like thing -- it got smooshed, I suppose it's possible it was some other yellow and black striped stinging insect.

A day later, I almost had second thoughts about heading over to the beehive that's on the monastery property, but I wanted to illustrate community, so off I went.

I was pretty cautious, snapping photos from what felt like a safe distance ...


but I wanted better photos ... 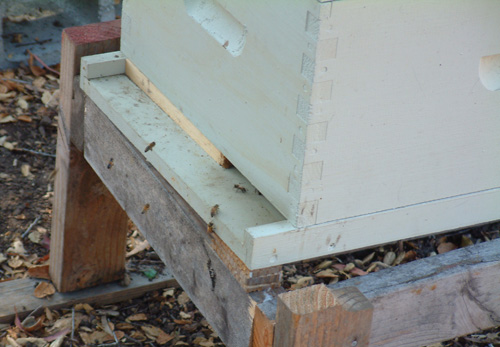 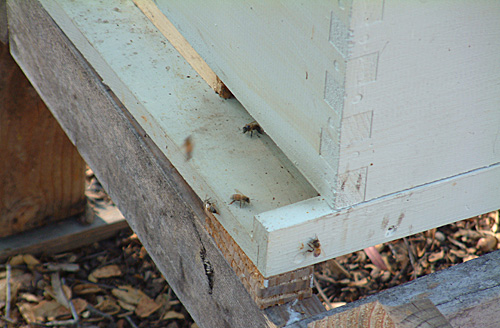 and then I stepped into a bee's flight-path.

It bounced off my upper back (right between the shoulder blades) and into my hair.

I squeaked (well, wouldn't you?) but stayed calm, backing away from the hive in case another one ran into me, giving the caught bee a chance to escape on its own.

No such luck: it was clearly tangled in my fine, curly hair. So I took off my hat and fluffed my hair forward, freeing the bee.

Which bounced back onto my upper arm. Twice.

I didn't need three times to know it wasn't happy (but I got it) and so I walked away from the hive (sadly, all the while talking to the bee). Ever been escorted by a bee? It's the weirdest sensation.

I got what I thought was a good distance away from the hive but the bee disagreed.

It buzzed in front of me, landed on my camera (and it would've been a really good photo, except, well, it was on the camera), and then launched itself up, hovering right before my face, a few handspans away.

It might have been giving me the hairy eyeball (or several hundred, I guess, given its physiology), or something else, but it was really cool.

I told the bee that I got the message and I kept moving away. Another ten feet and it let me be.

Aside from the adrenalin rush, I was thankful for the fact that the bee chose not to sting me.  Thinking about it much later, I also wondered if it was either a) rescuing me from being too close to the beehive (aka stupid human); or b) thanking me for not squashing it and generally freaking out either while it was stuck in my hair or afterward.

That evening, while I was sharing this with my husband via the phone (he's allergic to bees and thus deathly afraid of them), a bee bopped me on the arm. Twice.

So whether this is all anthropomorphizing (your big word for the day) or a gift to accept from God is up to you, the reader.

Oh and yeah, next time I'm keeping a respectful distance. Linking up with: