A Year of Biblical Womanhood (review)

- November 23, 2012
Last evening, halfway through reading this book, I found myself leaving blog comments of eshet chayil! (woman of valor) here and there. It's even fun to say because the "ch" sound is kinda as in "loch" with a bit of spit. 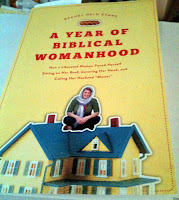 By Rachel Held Evans, the full title is A Year of Biblical Womanhood: How a Liberated Woman Found Herself Sitting on Her Roof, Covering her Head, and Calling Her Husband "Master".

Thanks to eating too much rich food on an upset stomach (yay Thanksgiving), I stayed up past midnight to finish reading it.

This may be the third most influential book for 2012. (Rachel doesn't come in third. It's just the third book this year I've found.) For me, I hasten to qualify, for where I am right now in my faith journey. Your mileage may vary, but it is a darn good read.

The other two (in no particular order except the order I read them in) are Ann Voskamp's A Thousand Gifts (which okay, technically I read at the end of 2011), and Emily Freeman's Grace for the Good Girl.

Like those other two books, A Year of Biblical Womanhood is liberating, in ways I am struggling to put into words.

I giggled through A.J. Jacobs' A Year of Living Biblically, but Rachel's book has a different tone. For one, she starts out in a place of belief. The scriptures mean something to her, she wrestles with them, and contemplates them. (But also, I giggled here and there.)

The topic she's tackling is prominent in the evangelical church (from which she hails). Biblical womanhood uses select bible verses to prevent women from teaching in the church, to be submissive to their husbands (ignoring the other half of that Pauline admonition!) and that their life's primary work is to bear and raise children. Oh, and to not let yourself go so that your husband will not be tempted by another woman.  It actually represents more a 1950's understanding of a woman's place (think Mad Men) than an ancient Middle-Eastern/Jewish understanding.

Thankfully, "biblical womanhood" is not a churchwide phenomenon.

Growing up in a church which allows women to be priests (although I was in my teens when I first met a female priest), bishops and presiding bishop, and growing up in a world where the career options for women (in the Western world at least) are dazzling, I was already strong in this understanding of biblical woman being something other than a June Cleaver.

Rachel gave that understanding depth: like the eshet chayil (woman of valor) found in Proverbs 31, a chapter used as a rules-list for the perfect "biblical" woman but which is actually a song of praise for a fearless woman who has met the day's challenges, big or small.

I've been a feminist since I was in high school, so my acceptance expanded when it came to valid career choices for women. Not only church leadership or being CEO, but also raising children, and working as a creative from home. That, in fact, any career free of exploitation and abuse is for a woman's choosing, according to her gifts.

And then she gave me further reading, not just on her blog, but of books to read about how to reduce the damage I cause my less fortunate sisters in this world. I knew about recycling and fair trade, but my eyes were opened to other resources.

Most of all, was the idea that we do not have to be that perfect Proverbs 31 (if one ever felt the guilt from that), or be perfection in any of our roles. We become women of valor through any small good act, any gift, any sacrifice, anything done well, through acting in love.

Although we've been told since Eve was cast as from the devil during the medieval period, we women are not the problem, we are the solution.

Later this week, I plan to write a post about the women of valor in my life. Rachel is now among that number although our lives have never intersected personally. (I don't think knowing someone who lived for a while in her home town counts.)

And in the interests of disclosure, I bought my own copy of this book, waited to read it until I was back from vacation.
book eshet chayil