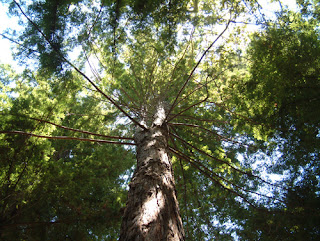 I've been on vacation (holidays) to Australia for the past three weeks, hence the silence. There is much to post about, but I am going to start with what is uppermost on my mind.

The amount of time I waste.

I came home to a DVR that was 99% full (and some episodes had been deleted in our absence) and over 400 blog posts in Google Reader. There would have been more, but I had snuck on a time or two to do some whittling down and had started catching up once we landed in San Francisco and were waiting for the plane home.

This is out of control. I actually felt the pinch of wasting time while staying at my Mum's but have come to realize that my getting online in the morning is equivalent to her turning on morning television -- it stops both of us from doing what we want to do, which in my case is morning prayer and meditation.

I had plans today to spend a good chunk of quiet time just being, but now I think I need to clear some mental clutter first.

I am going to stop watching three TV shows (one of them is a guilty pleasure, a soap I've watched since I was little).

I am now down to 63 subscriptions.

The keep category are those that I did not want to skim through -- they are still unread actually but I want to devote time and attention to them, which is something I didn't have with 400+ posts to read.

The if I have time category is just that -- if I have time to read them, I will, otherwise I'll click "Mark all as read" and refuse to feel guilty about it -- and after a week or two will go through another winnowing. Some may go, some may move to the keep category and some will stay where they are.

I came home with an urge to winnow out my cook books and printed recipes -- and have two new cookbooks to add there. *sigh*

I came home with an urge to winnow out my closet again too.

In case you're worried about asceticism, I'm planning to buy a new tea pot (for one as opposed to the "for many" teapots I already have. Yes, plural. There are three.)

The point of all this is that I spent a day and a half catching up on blogs in between watching television, doing the laundry, putting things away, and planning and shopping for this week's meals. I could have achieved a whole lot more, but today is a new day and a new start and I'm not going to beat myself up about it, just make a few changes.

To make room for what's important.

Like this guy did after the plane he was on landed on the Hudson River. (the link is to a TED talk on YouTube by Rick Elias that  I found in my Facebook newsfeed this morning)

What are your time wasters? How do you manage them?
blog listening to God