Saint for the year...

- January 02, 2013
Jennifer Fulwiler asks us to pick a saint for the year. I don't seem to rate a full on saint. Last year was a blessed (Bl. John of Parma), and so was this one. 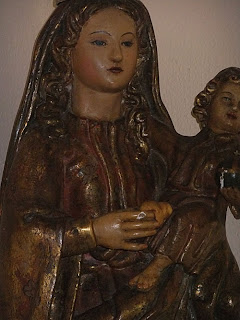 Before I clicked on the link, I prayed that God would lead me to a saint that would encourage me to spend more time with God, being prayerful, still, listening and all that.

Pretty sure God has a sense of humor.

Because I ended up with Blessed Margaret of Castello.


Born a blind, lame, deformed, hunchback midget {in 1247} When she was six years old, her noble parents walled her up beside a chapel; she could not get out, but could attend Mass and receive the Sacraments. After 14 years of imprisonment, her parents took her to a shrine to pray for a cure. When none occurred, they abandoned her. She became a lay Dominican, and spent her life in prayer and charity. When she died {13 April, 1320}, the townspeople thronged her funeral, and demanded she be buried in a tomb inside the church. The priest protested, but a crippled girl was miraculously cured at the funeral, and he consented.

Yup. Someone's got to wall me up in a chapel before I'll sit still long enough to be with God. Good one, God. Thanks for the clue-by-four.

This is followed by the thought: somebody walled up a six-year-old?! This wasn't by choice, like Julian of Norwich's hermitage. How absolutely horrible.

More info here that reads a bit like a hagiography.
saint