- August 20, 2013
It's our second day at writing an icon and we haven't finished all that the students had done in their first day.

This is not because of stopping to snack on roasted red pepper hummus, raw garlic spread with dill (yum!) with rosemary and onion flat bread or stopping to make potato skins. Well, hardly all that. We also mixed some more sankir (green) paint because we worried we might run out. We didn't.

All the layers of thinned paint (think milk consistency) takes for ever to put on. Especially the oxides which look streaky and take forever to lay down an even color. Why not slap it on at it's original consistency? 'Cause then you get dried acrylic ridges and what not which can make it tricky to layer color smoothly over the top.

And I had the lifting of paint problem again. Said "Goddammit!" aloud when the one at the end of the pointy finger appeared out of nowhere and made Helena giggle. So it was time to go help prep and then eat the potato skins, letting the paint dry long enough for me to tackle layers over this.

We spent the first hour or so in silence, and then I put some music on.

Amongst our playlist today:


Yeah it was monastic chanting heavy, but there were a few Good Sam choir pieces in there too, some even in English. We did not quite make it to Monteverdi's Vespers for the Blessed Virgin as I thought we might, but maybe next week. 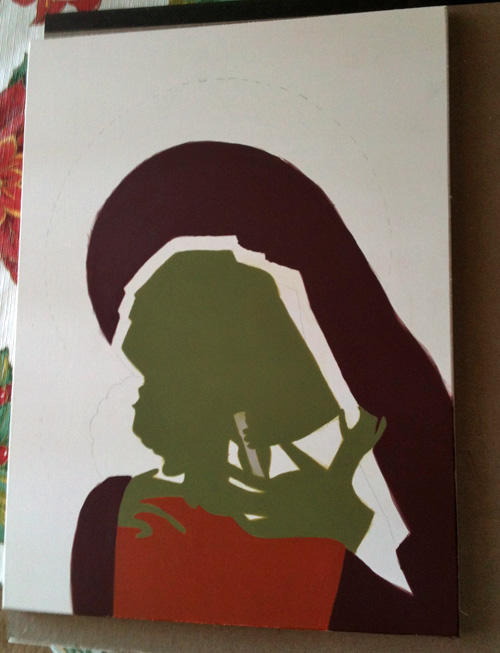 Just have the storm blue, halo red and hair base to go (and the background but we'll be doing that a bit later) before we start layering different colors on top of these.

In the schedule I made up for us one June afternoon, I have us doing "hair" next week. I don't think so. We might get to the doo-dads however.
icon