July 24: Before letting dogs out, we check for skunks. There was a small one on the far side of the patio. I leapt back inside, then crept out to shoo it off (aka make just enough noise for it to move, not to spray). I stamp my foot, say "go! go on!' which a certain dog takes as permission to squeeze his way out the back door. There was indeed then sufficient shouting and movement for the skunk to be on its way. And not spray us instead. This is what I mean by a close run thing.‪#‎reallycloserunthing‬ 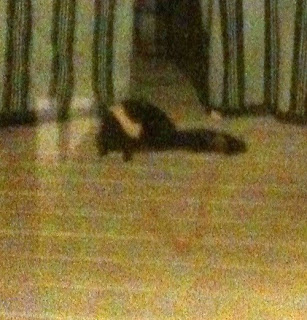 Skunk Adventures, Part the Second. July 26: Again on the far side of the patio -- I spotted its tail sticking out behind the chair. I ask it to go away and it obligingly does, heading up the slope. I let the dogs out, advising said skunk to stop moving otherwise my dogs'll notice it and sure enough, a certain dog does. It barks at the hillside, heading for where the skunk was. He gets yelled at, dragged back ... No spray and I send my apologies to the skunk. Although its probably very confused about me now 'cause its heard me yell and be nice. *sigh*

Part the Third, July 30: The skunk again was at the back of the patio. I backed up, made sure the door behind me was closed. "Hey skunk, could you--?"
The skunk heads up the back slope. I see the black and white fur appear and disappear. I wait a moment or two longer until I can't see or hear it.
"Ok skunk, be quiet now, don't move."
I let the dogs out stand between them and where the skunk was, hoping radiating unconcern and we all make it back into the house without incident. 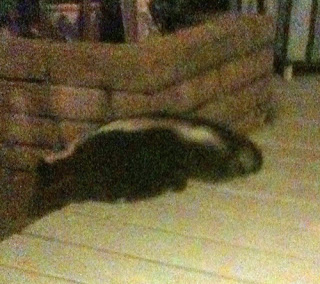 Photos are from previous skunk visits (the current skunk is smaller) when my dogs and I would sit behind the back door's protective glass and I would coo and the dogs would growl and occasionally bark.


By the way, I don't mind my backyard being a way station for wild animals. Just so long as I respect their space, they can sleep under out patio and eat as many Japanese beetle larvae as they want ( even if this means having to occasionally replant).
#reallycloserunthing skunks