Staying in the Moment #5: Squirrel!

I look up--
Out--
Grey and still,
Is it fake?
The head twitches. 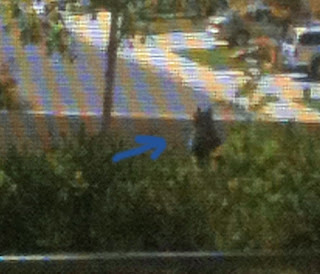 It's a horrible photo. It was late afternoon and I used my iPhone (may take better camera this week). He looked unreal until those little ears twitched and I did a double-take. No idea what the little guy was watching, but I watched him and finally mentioned him to Helena who wanted to spray water at him 'cause he's been eating her plants. (No idea from this angle, if said squirrel is actually a he or a she...)