Pretty much. I didn't end up using the Twinkling H20 watercolors I packed, but mostly stuck with my Inktense pencils and Prismacolor pencils for coloring.

I scribbled a poem (which I'll post on Tuesday) in my composition book.

I wrote in my spiritual journal reflecting upon why I wanted to learn the Sh'ma in Hebrew, as well as a special gift moment during communion.

I made 5.5 art journal pages, using previously written poetry as a base for most of them. And then I reached a pretty scrapbook page and couldn't figure out what to do with that, while having the urge to do a sort of symbolic self-portrait of myself on retreat but bemoaning the fact that the next sequential page just wasn't going to work for that ....

I finished reading "In the Shadow of the Temple" on my final morning. The book really sucked me in and is fascinating, but more on that later.

So fascinating that two nights out of the three I didn't read the "Psalms for Praying" book to ease me into a sleepy state. (The psalms are good, it's just lovely to reflect on them as the last thing before the light goes out.) 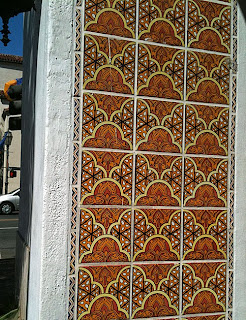 The Pope Francis interview got read on the train up and back. If you haven't read it, I highly recommend either buying the Jesuit magazine "America" or purchasing the article for your Kindle.

I didn't get to any of the other iBooks on my phone.

I did a lot of walking, not enough sleeping and didn't smell roses.

I found a hawk feather though.

And this awesome windstorm blew through....

Oh and I took two photos: one was a tile pattern on a building in State St., the other was a picture of the wallpaper in my room. I'll spare you the wallpaper one..

I am signing up for #31Days, which is 31 Days of blog posting. I have a vague memory of having done a shorter stint earlier this year, but have blocked it from my memory, so who can tell. Anyway, it starts Monday night. Twenty guesses as to what I'll be writing about....

Hint: I'll be doubling up on posts some days so you can continue to follow the icon process....
mt. calvary retreat