When Unplugging Makes a Miracle

- March 20, 2014
"When Unplugging Makes a Miracle" is a great headline, but honestly, I had forgotten I had already signed up for this particular activity when I chose my Lenten discipline of unplugging from Friday sundown to Saturday sundown, so I would've been doing it anyway.

But it also caused some first world problems like: I'm unplugging, how on earth can I call you if the pickup plans change? (answer, use somebody else's phone...) I decided a happy husband who wasn't waiting for me at the wrong place would be better than keeping the fast.

A miracle did happen though ... both through hard work and opened eyes.

Where to start the story? Let's start with a handful of youth group kids who went to an Indian reservation one summer and came back transformed, energized to start making a difference. Two of the youth and their parents found a non-profit that builds houses (among other things) in Tijuana, Mexico. They presented this idea to my church's vestry (basically, a governing board), who gave them some funds, and they raised the rest.

And then we went to Mexico for three days spread out over a month. I could only go on the last trip, which was a hot day because apparently winters no longer happen in Southern California. I spent time working on a mural and hand mixing concrete.

Here's a photo I nabbed from my church's e-bulletin. The yellow arrow is where I was hiding out in the photo, you can just make out the top of my hat. The family we built the house for is front and center. 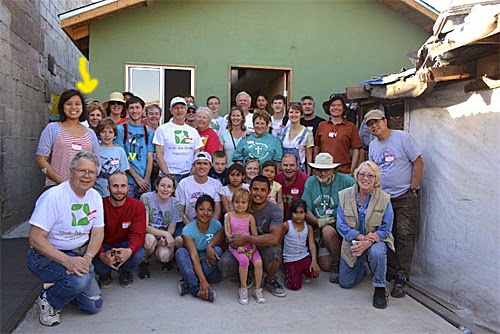 The new house is the green building behind. The youth raised enough money to build it and furnish it, and then one of the moms opened up a house warming registry at Bed, Bath and Beyond. It was quite a sight to see all those bags being walked across the border!

Also the tarp to the right? That's part of a wall of their original house. You can see examples of other homes that have been replaced by newer ones at Build a Miracle's website. The week before it had rained and the water had rushed through their tiny home and destroyed one of the two mattresses the family of five slept on. They'd been sleeping all on one mattress all week.

And now they have a roof and walls that doesn't leak, new bedding to sleep in... I'm so glad we were able to help.

This is the mural I helped with. That tall cement block wall is their view out their kitchen window. So one of the Good Sam artists was enlisted to help. She planned out the painting and I was one of her two helpers to speed it along. It also helped that it was in the shade and that the narrow walkway we worked in also created a bit of a breeze. 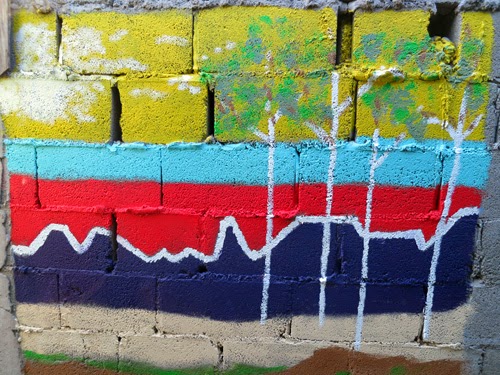 We worked by guessing the view as the windows were all covered up with paper to protect the glass from the inside and outside painting scheduled to be done that day, so we didn't quite succeed in covering up the entire view.... 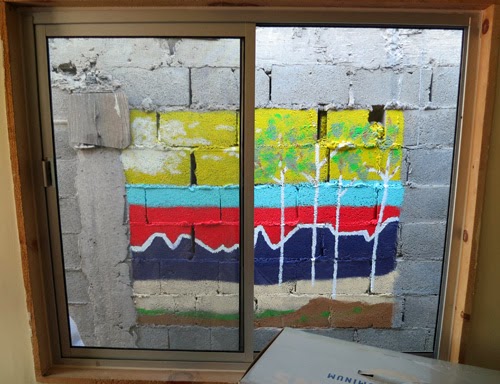 I've visited Mexico twice, once on a cruise and one brief visit to a border town across from Arizona. This trip, while other folks on the bus around me chatted about their lives, I stared out the window.

The huge contrast between the haves and have-nots is gigantic. Every house is a fortress, whether it was iron gates or pieces of broken palettes. Even the modern homes, small units really, seemed purely functional in their cube shapes and were barricaded by high walls.

My eyes gravitated toward the light:
I'm not sure how all these observations will meld together yet. I've been holding and honoring it off and on in the weeks since then.

Everyone from the family, to the Norths who run Build A Miracle, to we volunteers were deeply touched as the family walked into their home and saw everything.

This was an Extreme Home Makeover worth watching and participating in.
God's love stories lent thankslive