On the Precipice: Beginning Advent 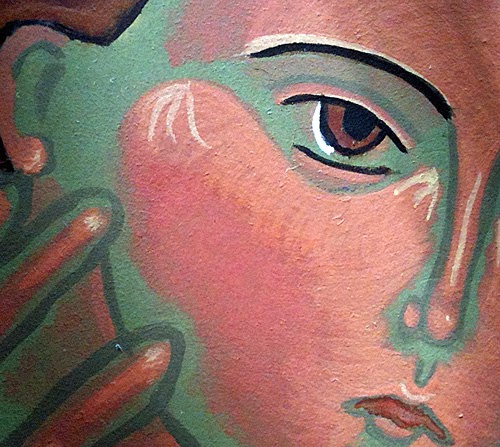 We're on the precipice. It's Advent, the start of a new year.

We're on the precipice like Mary was two thousand and fourteen years and eight months ago or thereabouts.

Two thousand and fourteen years and eight months ago a young girl said yes to God and received the answer to her prayers, to her people's prayers. She stepped way out of her comfort zone because of what God promised.

To her relative, she sings this. She is carrying the unborn Messiah, the one who will free Israel from the Empire, from the oppressive monarchy that has impoverished her people, her family, her father, herself.

A Messiah like King David who defeated the Philistines and set Israel into its Golden Age.

We can look back at that moment two thousand and fourteen years and eight months ago and think: boy, did she get that wrong. But how wrong did she get it really?

Her son was quite the unexpected Messiah.

She saw the path ahead as straight, not an easy road by any means, with her reputation now whispered about, facing an impossible rise from poverty to glory, but she trusted in God that he would fulfill this promise.

Turns out there were a few turns and dips, but isn't that how our faith journey goes?

There are stretches where the road is straight and narrow. We come to forks in the road, which path will lead us to God's promise? And sometimes we step off the road entirely and wander around until the Christlight finds us again.

Two thousand years and eight months ago, Mary looked ahead and saw a Messiah restore Israel.

Two thousand years later as we look ahead these four weeks to celebrating the birth of the Messiah, what is God birthing in you? Is God calling you out of your comfort zone and into God's promise? We're on the precipice of something new. What do you see on the path? What is God calling you to?

We'll start in earnest on the Magnificat tomorrow. I started reading The Real Mary: Why Evangelical Christians Can Embrace the Mother of Jesus by Scot McKnight and this sprung out, partly because I'm already mentally arguing with the author. (And also, is anyone else watching The Sisterhood on Lifetime? About discerning a call to the monastic life?)
advent magnificat