Behind the Art of the Advent Choral Celebration flyer

- December 03, 2014
I've been designing the flyers for the Advent Choral Celebration, since I worked at Good Samaritan and with the music director we changed it up last year. This year, instead of finding artwork on Wikimedia Commons, I felt confident enough to try myself.

I wanted something rich in color and to symbolize the energy of the music we're singing this year.

The first attempt turned out wooden, like I was trying too hard to color in between the lines and ummm ... 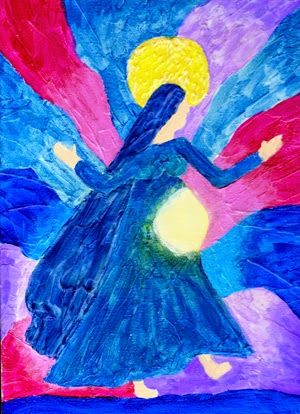 Can you spot E.T. Jesus? Yeah, so that. One day I will be able to do what was in my head.

I set up the canvas panel on my easel, centered myself in prayer, and turned on the music. I had created a playlist of music I was supposed to be practicing by plus a bunch of Vespers of the Virgin Mary.

And it all became organic from there: I sprayed, listened to some music, sprayed again. I dabbed and mopped and tried to undo what I just did... Until I was satisfied with the background.

I drew a very simple shape -- and this is going to sound weird -- channeling the feeling of dancing as light as air through my arm. It's a simple drawing.

I oohed and ahhed at how the canvas resisted the inks making it look like stars, and that those stars were positioned with in the figure.

I wrote over the Faber Castell gelato pen with a grey FB brush pen and added ink to make a shadow around the figure.

And there you have it. 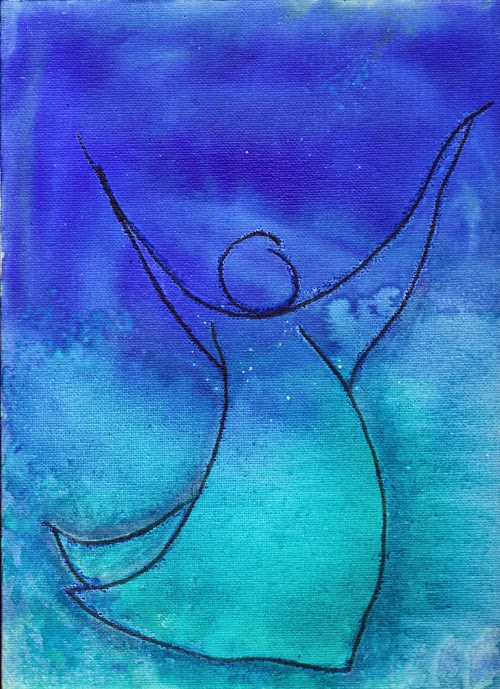 If you're local, please come along to the Advent Choral Celebration. We're doing many different styles of music from Classical to Contemporary and stopping off at gospel and jazz along the way.

It's going to be awesome.

(Also please note these images are copyrighted, so don't use them, okay?)