- July 01, 2016
I've participated in Where Bloggers Create which is a blog party that shows off various creative spaces. I wanted to put them all into one spot for future reference. If you want to see my past entries, you can click here: 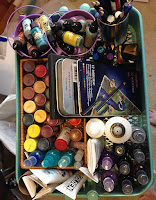