- August 25, 2016
I have gone silent a bit lately because well ... I have dogs once more. Two adorable, smarter-than-me, could-do-with-some-training (and they're getting it), wee dogs that have been taking up a lot of my attention lately as we settle in together. They're shelter dogs, were turned in as strays, and had terrible matted coats so they have some serious separation anxiety issues but we're working on them. 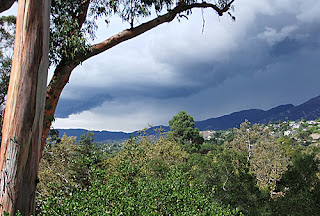 Earlier in the year, I finished reading "Grounded", by Diana Butler Bass. The opening introduction inspired me to write a poem about the two Mt. Calvarys. (Mt. Calvary is a monastery retreat house in Santa Barbara.) The one on the hill top before it was destroyed by fire and its current location. I thought I'd share the poem.

On a mountaintop
My heart broke open,
filled with God's warmth