Should We Let this Election Continue to Bring out The Worst in Us?

- November 17, 2016
This week I have seen a lot of hate on my Facebook feed. Hate toward Trump voters, non-voters, third-party voters, Clinton voters. Nasty comments in people's posts that are filled with disdain and viciousness. I have read about reported acts of hate toward people of color, women, muslims and LGBTQI people.

I have a mixed crowd of all kinds of people and politics on my Facebook feed. Over the course of the election, I felt the need only to unfriend one person who was viciously mean and disrespectful.

Now my feed is full of meanness and disrespect. Imagine two monkeys so angry at each other they start hurling their excrement. That's what it is like now and we're starting to stink of shit. I've taken refuge in art (I am having an amazing time taking Flora Bowley's Bloom True e-course), posting photos of my dogs, and I am seriously considered taking a Facebook fast.

So why are my friends behaving so badly? Have we, lost in our hurts, forgotten who we are? Beings created in the Divine image?

I would hope they realize that we need to continue to speak out against harm coming to our fellow human beings.

Before the election, I wanted to write something about reaching out to those who have been hurting throughout this election cycle. In addition to this hatred of Other, there are those who are hurting economically, those who are crying out to be heard in the face of the establishment.

Who do I want to be in this situation?

I want to be the one who listens. The one who stands with the hurting. I think, despite feeling horribly ill-equipped, this is why I will be wearing a safety pin.

Diana Butler Bass posted this before the election. 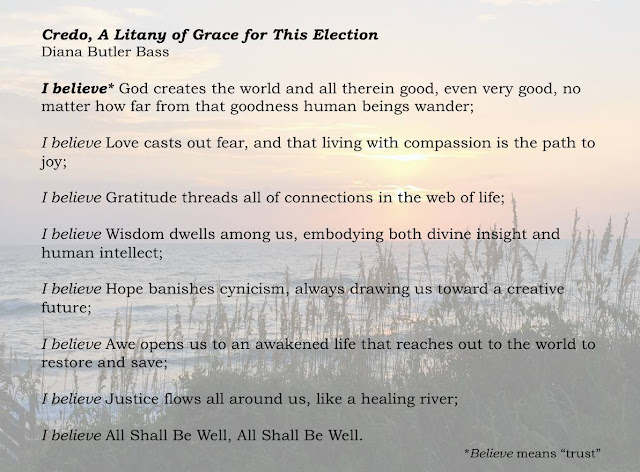 I still believe (and trust in) this.

If you're struggling to find your way in this, that's okay. Life is a process and we move through it and our emotions in different ways. I don't know if the links that follow will help, but they are helping me.

And this nation, and probably the one you live in if it's different to mine, needs healing. Hate has been held back, through civil rights legislation and political correctness, and it has burst through, a whole ugly mess that has been there all along, that people of color, LGBTQI, immigrants, and other groups have known and experienced all this time. There's no hiding it now, no stuffing it back into the cellar. We need to heal it. We need to heal us.

To that end, my reading list now includes:
(links all go to Amazon, but are not affiliate links)

Some of these have been in my to-read pile for a while. (The forgiveness book for a year and I haven't been able to find it yet, Bonhoeffer for at least five years.)

I close with the benediction Diana Butler Bass gave at a church the Sunday before the election: 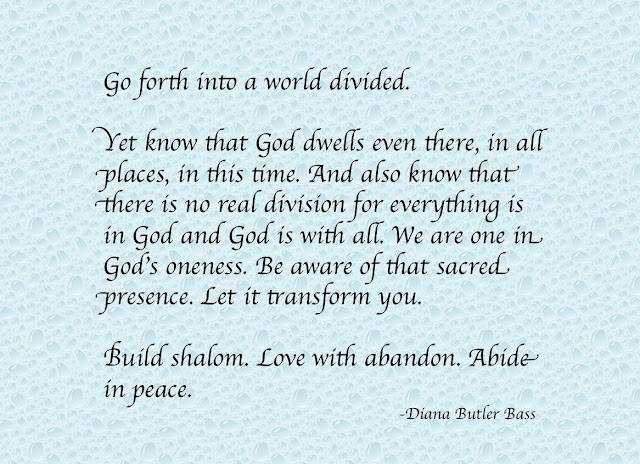 Blessings upon you all. All.

via GIPHY
#hopeforpeace kingdom of God