- April 10, 2017
When I went through Education for Ministry, we learned four different ways to tell our spiritual autobiography, where God had shown Godself in my life. Two of the ways were by using a timeline or by using images.

Now that I have recognized that I am an artist and in particular a visual artist instead of a writer of fiction, I thought it would be interesting to see where art has been -- or where I have been an artist -- in my life.

The first story I remember writing was a few sentences on top of a page illustrating a blue monster, which represented the bullies in my young 8 year old life.


I remember my mom taking us kids to the art gallery, and I loved the quiet space and the art on the walls both realistic and expressionistic.

Art was one of my favorite subjects throughout primary (elementary/middle) school and high school. Projects leap out of my memory: using watercolor pencils to do a continuous line sketch of branches and the whorls within; creating a clay bowl without a wheel and the grey lizard I shaped from the memory of the little grey skinks/lizards that are so endemic where I grew up.

Weirdly, art as a subject was also one where the fear of failure was real. I was pretty much an A student (except for home economics and sewing), but brain smarts had no place in art. At least, so I thought at the time. It was like diving in at the deep end.

Art became an elective in the last two years of high school and I took an extra unit of maths instead of art. It was the practical thing to do. But there was one free period that I had a week and I ended up sitting in on the art class, watching and chatting until the art teacher, Mr. C., told me if I was going to continue to be there, I had to submit art of my own. I bought a handful of pastels and some cheap watercolors.  I did the bare minimum and was a smart arse in the process, submitting a "painting" of a brown envelope, addressed and stamped.

In the first year of university, I dabbled in recreating costume sketches from Drama class and drawing palms against the sky. (At the time, I was studying computer science and had Drama as my one Humanities course: art wasn't an option.) I also had this cartoon character that ended up in the margins of my notes.

After that first year in university, The visual arts drifted away, but I continued to write. I didn't come back to art until I started scrapbooking. Because, paper, obviously. 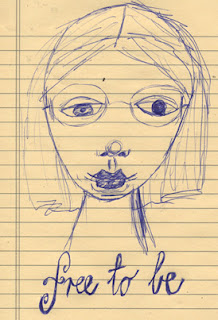 Then my part-time, on the side, writing career started to fizzle. I discovered Suzi Blu, a mixed media artist. Scrapbooking became mixed media and art journaling and I was hooked.

All my paintings of girls looked very po-faced, but I was having fun. There was delight and joy despite the frustration of not being able to draw what I wanted.
My paintings are now of strong women, not sulky girls, and I think they might be becoming recognizably mine.

That would be thanks to Lifebook 2015, which is a year of mixed media classes, creating paintings and journal pages with a whole bunch of teacher-artists, including the sweet and kind class coordinator, Tamara Laporte. It's through Lifebook 2015 and 2016 that I discovered different ways to paint faces. It's through Lifebook that I discovered Flora Bowley and got a taste of her intuitive painting method.

And it is with Flora that I discovered painting *created* joy. Whether I was angry or upset or frustrated, painting abstractly on a canvas cleared out the negative feelings and brought a quiet and very real joy and even delight. 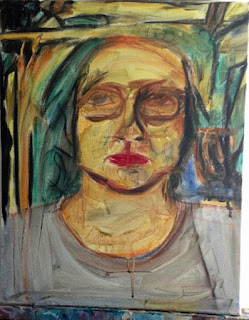 So that is where I am now. I manage to get into my art studio three to four times a week, despite working full time. On the weekends, I can spend hours in there, while during the work week, it might only be 15 minutes or so and it'd be a sketch, or putting down a layer of gesso or some collage.

Art is for myself, right now, no performance anxiety or "will they like it?" is needed, although I was excited to share two self portraits that are recognizably me and more recently got even more excited when two other artists I admire (Annie Hamman and Misty Mawn) complimented me on a third self-portrait and encouraged me to do more.

Wanting to do more is definitely something I want to do! As I've been reflecting on my word for the year, joy, art is a central part of that. This month's one little word project was to create a vision board of our word. Here's the art related one: 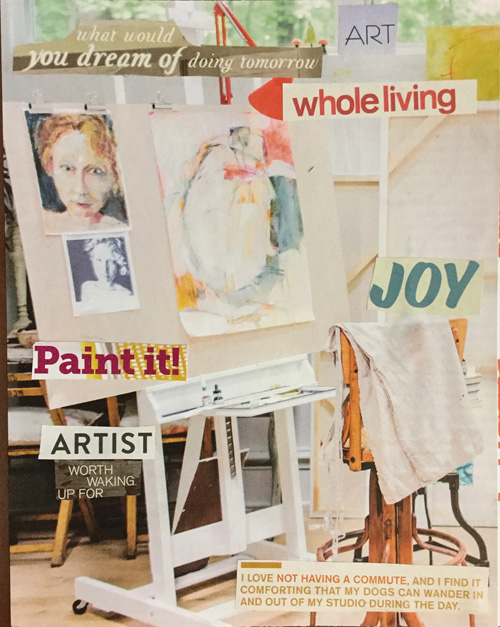 And that's the story so far!