Can we be the Sower?

- July 16, 2017
It has been a while since I blogged the lectionary. When I decided this past week that it was the time to get back to it, I discovered that I'd started doing this in Year A in 2014. And we're back in Year A again. 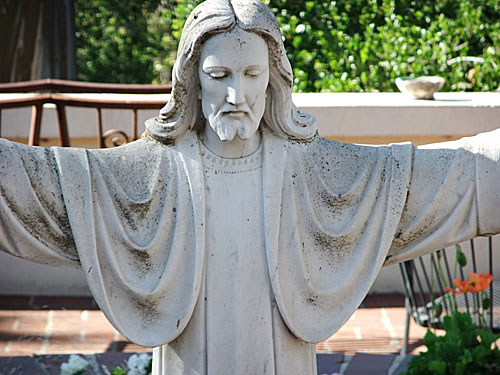 This could be subtitled, "Wherein I get caught up in Paul but thankfully remember what it's all about. (Hint: God's love.)

In Judaism, there is no original sin. God created humanity in God's likeness, with free will, and so as Rabbinic Judaism describes it, humans have yetzer ha-tov, the good inclination, and yetzer ha-ra, the evil inclination, the latter being "a drive toward pleasure, property or security, which left unlimited, can lead to evil" (per myjewishlearning.com) However, this is not all that humanity is made of, so this is not a simplistic dualism. There is also the mind, the heart (equivalent to the gut in the ancient world, for example, a gut feeling), and the soul.  The two yetzers are what Paul is talking about when he speaks of the flesh and the spirit. Remember yetzer ha-tov (good) and yetzer ha-ra (evil, sort of). We'll get to Paul and today's gospel parable in a sec.

Let's start at the first of today's readings. Both Esau and Jacob exhibit these two natures. Esau has both good (we know because Isaac, who was consecrated to God, loves him) and evil: his desire for food is so great, he gives up his birthright. Same for Jacob, the yetzer ha-tov of living simply and wrestling toward God (as we'll see later) versus the yetzer ha-ra of coveting his brother's birthright -- and giving into that desire. Nobody in the Bible is perfect.

This idea of two natures or inclinations dates to rabbinic Judaism, which yes is after Paul, but Augustine's concept of original sin is also after Paul and has been read back into it. When Paul speaks of flesh it is yetzer ha-ra, spirit is yetzer ha-tov. Capital-S Spirit is the Spirit of God. Note also, that Paul uses different Greek words for flesh (sarx) versus body (soma). It's not Augustine's neo-Platonism of flesh/body vs. spirit/soul (or shadow vs reality). But two different parts out of many of being human.

It turns out I am not the only person who was thought of this: both W.D. Davies and his student E.P. Sanders say that Paul's word choices are consistent with a developing theology that led to (and was further expounded upon) by rabbis after the Second Temple's destruction.

Try re-reading Paul in this way: "But you are not in yetzer ha-ra; you are in yetzer ha-tov, since the Spirit of God dwells in you." (Romans 8:9)

Yet even with the gift of God's Spirit, we are still mortal and we still struggle between these two inclinations. Paul ranted about this in last week's lectionary passage: "For I do not do the good I want, but the evil I do not want is what I do." (Romans 7:19) And he's one who has the Spirit of God with him! You've probably thought to yourself by now, what does it really mean to be in Christ Jesus if we still struggle with yetzer ha-ra? The things we shouldn't do, but do? Remember Jacob and how he wasn't perfect either? We are none of us expected to achieve perfection. It is God's mercy and loving-kindness that sees us through the mess of human life.

This is also where today's gospel parable comes in. Because receiving the Spirit of God isn't a passive act. It's a get-up-and-go active response. "Let anyone with ears, listen!" (Matthew 13:9) Listening is not a passive reception but active. We need to want to hear the word of the kingdom first. How and why we don't listen are the reasons behind the lack of fruitfulness of the first three soils, various yetzer ha-ra motivations. If we can hear and understand, then we become fruitful in the sense of becoming a sower ourselves, bringing in a new creation, "pursuing what is right for everyone" (Jewish Annotated New Testament, my emphasis).

The important thing is the Sower doesn't give up. The sower can be God, Jesus, the disciples, or those who have the Spirit of God through Christ Jesus as Paul does, that is, us, our active response. Again and again, the word of the kingdom is sown, the Holy Spirit is sent, without discrimination, without judgement, without despair because a seed fails.