Transfiguration: The kingdom of heaven is revealed

In last week's reading, the kingdom of heaven was hidden: a mustard seed invisible in a field, a speck of yeast, a buried pearl.

This week, the kingdom of heaven is in plain sight: and it's too much for mere mortals.

In our Exodus reading, the Israelites and Moses' own brother run away at the sight of his radiant face after he comes down the mountain from his chat with God. They are only able to look upon Moses' bare face for short periods of time when he shares with them messages from God. The rest of the time, Moses is veiled, his face concealed, hidden, for it is too much for the people to live with. "It" being the reflection of God's glory, or, as I like to think of it, overwhelming divine love.

In Luke's gospel, Peter, John and James witness Jesus' face change and his clothes become dazzling white. Radiant. That and the descending cloud of God and God's voice sends them tumbling down the mountain. Well, that's how it is pictured in iconography -- these otherwise serious apostles upside down, and one even loses a sandal. 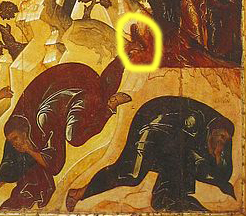 In Exodus, Moses is terrifying. In the canonical gospels' story of the Transfiguration, God's voice is terrifying. Hmm, where else have we seen someone being counseled: "Do not be afraid"? (Which Jesus says in the Matthew version of this story, 17:7)

Oh yeah. Angels. Angels always begin their pronouncements with "Do not be afraid." These messengers of God are not just bringing the divine word, but like Moses, have been in the presence of God. And if you read some of the other books in the Hebrew bible (and Revelation), angels are pretty scary to look upon.

One theologian, William Propp, thought that the Hebrew word to describe Moses’ radiant face actually meant it had been disfigured. Luke doesn’t use the Greek for “transfigured” (like the other two synoptic gospels) but the Greek word meaning “became other”. Was his intention to show Jesus in that moment as wholly divine? Can the presence of God re-create us?

Why would the kingdom of heaven, the sight of God, be so terrifying, so overwhelming?

Is it because for that moment our encounter with God is completely out of our control? (but honestly has it ever been in our control, how we deal with God?)

In 2 Peter, the letter's author talks of the day when the morning star rises in our hearts. The day when God comes to us and transfigures us.

Such a faint light, compared to God's radiance -- but still a response, a response to the gift of the Holy Spirit and the gift of God's love.

The disciples in this portion of the Gospel take this revealed glory, this moment of unadulterated God-glory, this hint of the promised new heaven and new earth .... and say nothing.

Once more, the kingdom of heaven is hidden. The three disciples say nothing about this until after Jesus' death and resurrection.

I wonder if, in those days between transfiguration and crucifixion, that they, like Mary, treasured these things in their hearts, as if what they had seen was the wondrous morning star?

Sources:
Commentary on the Torah by Richard E. Friedman
"Who Is Jesus to Us?, The Transfiguration (A, B, C) -- 2014" by Rev. Anjel Scarborough, Sermons that Work, The Episcopal Digital Network
lectionary