I followed her journaling prompt (later used for collage fodder). Then I picked out my own color scheme and collage items, including a picture of part of my face (which was also part of the lesson), which I then basically painted over but used as a guideline. So far as a self-portrait goes, it isn't, but one of those abstracty concept paintings. 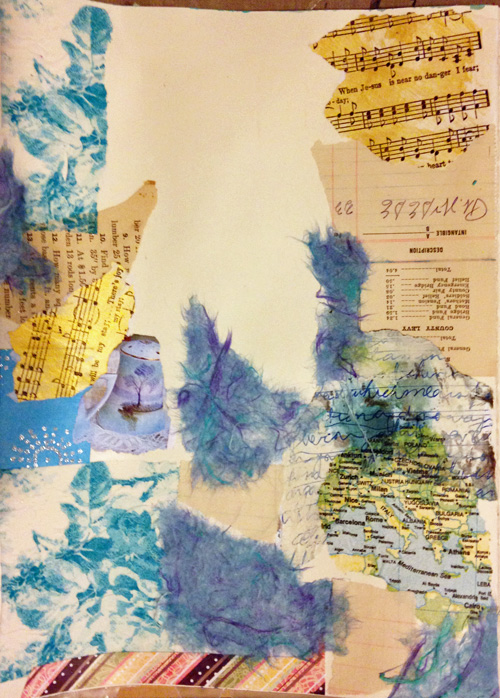 I left a space in the center because that's where I thought I was going to put the face, and then I changed my mind. Which is just as well, because the lesson had the face in the upper middle part of the page with the focus on the hands. Mine is more right upper with a focus on the face. Although I'm really happy with how the bowl turned out.

I call her "seeking wisdom". 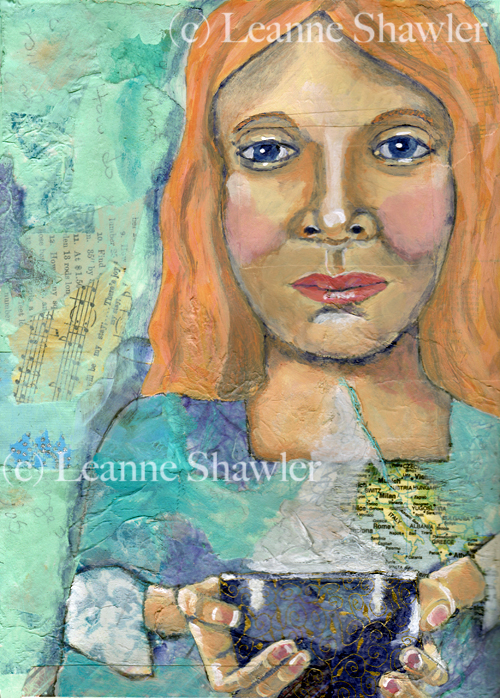 For my colors I used Golden's Smalt Hue and a smidge of Teal in heavy body, some Titanium White and Buff in Golden fluid, about three of Jane Davenport's matte paints in skin tones and pink, Blick Matt Acrylic in Green Blue Light and Sennelier in Warm Bright Yellow. I used a bronze/copper gel pen for the details on the bowl.

Aside from the collaging, I forgot to take pictures, so you'll just have to imagine her with a horrible pinkish hue as well as looking a bit like an alien, and I'll just have to live with she's all completely out of proportion. She kind of shrinks a bit as you go down the page.

I am still a week ahead in the challenge but I know that lead is going to evaporate at some point. I think it might be time for the Frida Kahlo re-do, or take a look at my list of painting ideas... Stay tuned.

Oh, and the painting from week 4 has been mailed off to its new owner, so as soon as I hear it's been received, I'll do the big reveal!
#52portraits52weeks LifeBook2018