- January 09, 2018
I still can't show you the 4th portrait, but I finished the 5th portrait in a couple of days. I forgot to put the lid back onto the wet palette and all the paint drying out kind of forced my hand. But she was already done, thank goodness.

I got inspired by an article in my home town paper, The Newcastle Herald. It was mostly about some coal company giving a small country town funds to improve infrastructure (with the associated drama). They spoke to local residents of Sandy Hollow and one of them was an artist.

He'd done a mosaic of one of the valley's legendary souls, a "lady bushranger", she was called, even though she was active in the early twentieth century, after most the reign of most bushrangers. (She stole cattle, mostly.) The Herald quotes the artist, David Mahoney:

His naked mosaic of a stylised Hickman, displayed at his Sandy Hollow gallery, was designed to “give the Lady Bushranger a little bit of status and make her look a little sensuous as a reminder she wasn’t just one of the men”.

You can see his representation in the slideshow connected to the article. (It's image 4 of 7.)

You know an artwork is successful when it provokes a response.

Mahoney's art inspired me to learn more about Elizabeth Jessie Hickman and I read her granddaughter's well-annotated biography. She was not a woman of her times, and she would be an extraordinary woman in ours. (Cattle-stealing aside.) She was a crack buckjumper/roughrider and trick rider for circuses and the precursor of rodeos and had an incredible gift with horses. There was no place in her life for marriage or babies or domesticity. She was a free spirit. She already had "status" because even though there were other women riders, she was the one who is remembered by locals and the riders' community. She was a legend.

She wasn't just one of the men, she was better than most of them.

Does a man have to be portrayed naked to prove he's not just one of the girls?

So here's my portrait of her. The caption reads: "I do not need to show my tits to prove I am a woman." The phrase leapt into my mind even before I saw the artwork and has stuck, especially with the more I know about her now. (Pretty sure she would make up some outlandish story about it, were she still alive.) 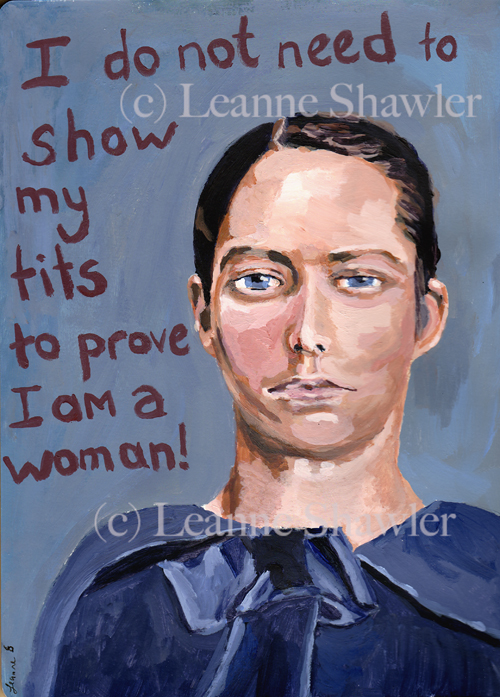 I hope it does her honor.

You might notice that one eye is smaller than the other and the mouth is not exactly even. Her slide into a life of crime started after the dissolving of rodeo /trick-riding outfit that she rode for. Before the outfit closed up for good, she went to New Zealand and while watching a show the stands collapsed, resulting in a head injury. She died of brain cancer. You can see how different her eyes are from each other in this mug shot. It makes me wonder if what we're seeing is the result of the accident. (As for the name in the photo? She went under a number of aliases.)

You can download or buy her granddaughter's book at Amazon. It's called Out of the Mists by Di Moore. It starts out a bit florid and meanders but it is an honest look at her grandmother, of whom she only knew by repute.

What's next? On a completely different note, a portrait inspired by the lessons in the first week of LifeBook 2018.