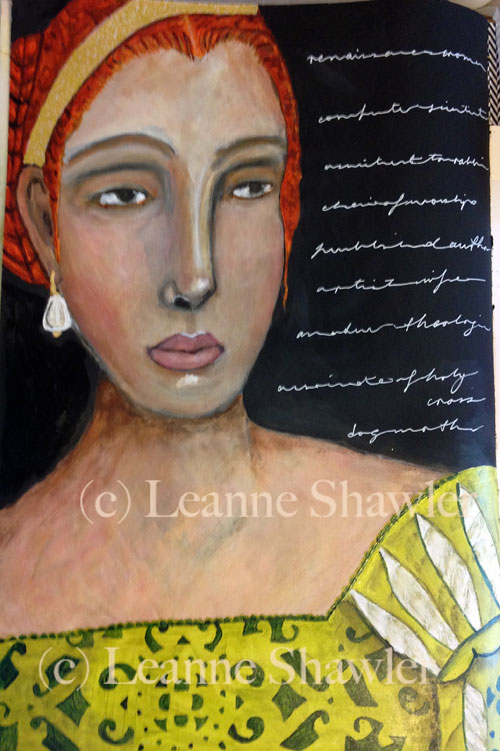 I also wanted to redo the portrait that I decided was too close to Tamara LaPorte's painting from LifeBook this year (and so I had refused to count it toward the 52 Portraits). Specifically, I wanted to take the over-sized glasses: 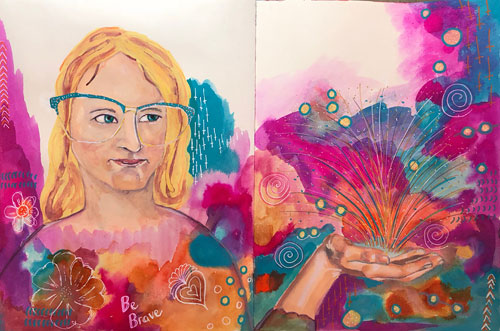 And then Ivy Newport inspired me by playing with Gustav Klimt. (She has an online class if you want to explore Klimt's work.)

This started out on a 16"x20" canvas board on June 4. I traced/transferred my face and the oversized glasses (I can tell you they really are that teal color) and then using the same reference photo of an old master (that actually hangs in a local art museum) that I used for the 2015 portrait, I sketched out the gown using a Lyra pencil. 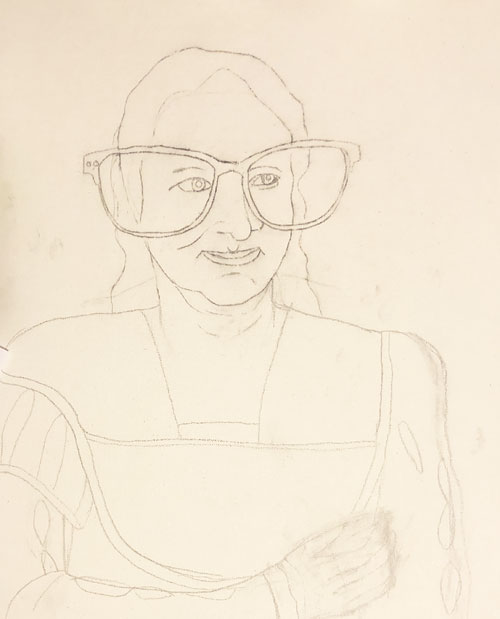 Yes, I had some trouble with the hand. And then the Gustav Klimt inspiration bit and I suspected that gold leaf would not adhere kindly to a canvas board so I transferred the whole thing onto an Ampersand Claybord of the same size. Oh and I had to order the board because I was out. So there was THAT delay. Yeah. 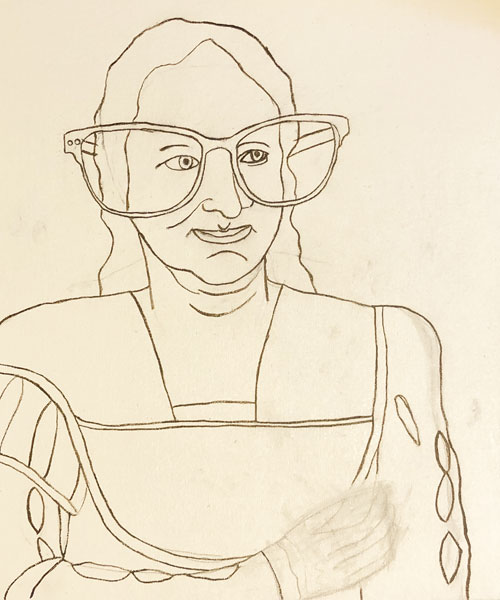 Here it is "fixed" with some OPEN acrylic paint in raw umber. Then I started in on the shadows using Paynes Grey in OPEN acrylic. At this point I was thinking the gown might be blue... Not blue. And what was left of the purple that I mixed went in to do a mostly first layer of shadow in her hair. And this is the first layer of skin tones. All in OPEN acrylics thus far and mixing the paints using a magenta, yellow, blue and white. Also adding some glazing medium to it for more transparency. 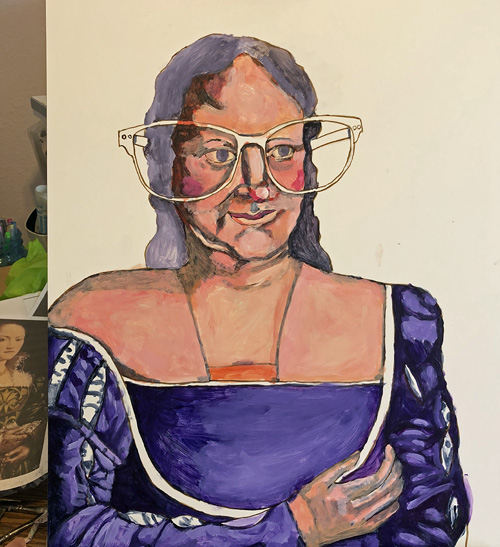 So I thought I would go blonde ... and it's looking a little helmet head like, but at least the skin tones are pretty finished and I don't look like I have leprosy. The hand is a little on the small side, but ah well. 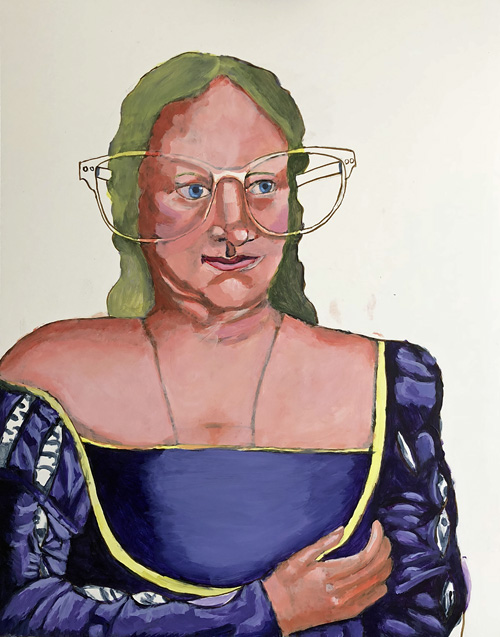 OK, so this is actually close to my hair color and I did it by glazing the darkest red-orange I had over the yellow. The brushmarks double as hairstrands! Also, got a start on the glasses and the background using up some left over purple paint. I also glazed white over the shoulders and front and a little for the cuff at the wrist for a gauzey effect. 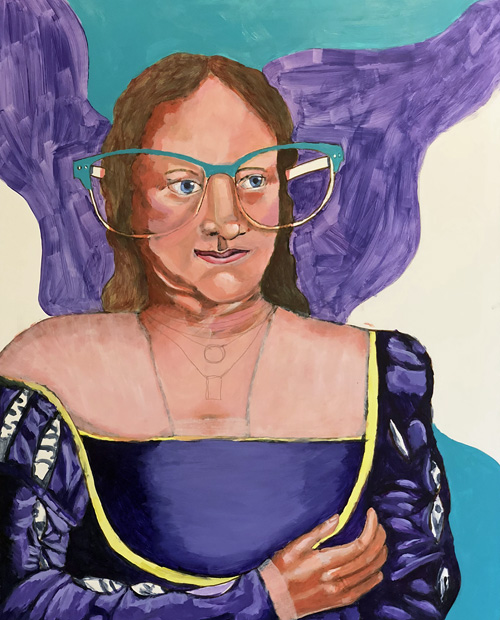 Then I collected all my gold ish collage items (mostly wrapping paper) and laid them out... 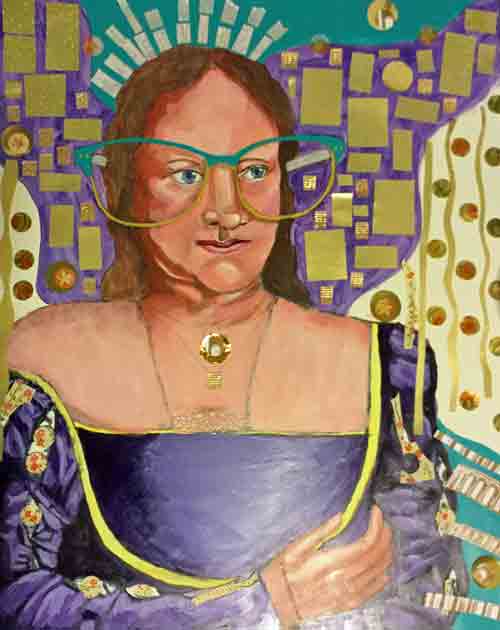 Glued a lot of them down. Used a Posca white paint pen for the teeny lines in the teal section at the top, riffing off of the collage paper I stuck down in a sort of tiara/halo. Lots of tiny purple Faber Castell Pitt Pen swirls are in the purple areas. This is what Effy Wild calls the sacred work. Repetitive and kind of contemplative. (I watched television.) I put down the largest areas of gold leaf. Composition gold leaf, not the expensive stuff I use for icons. 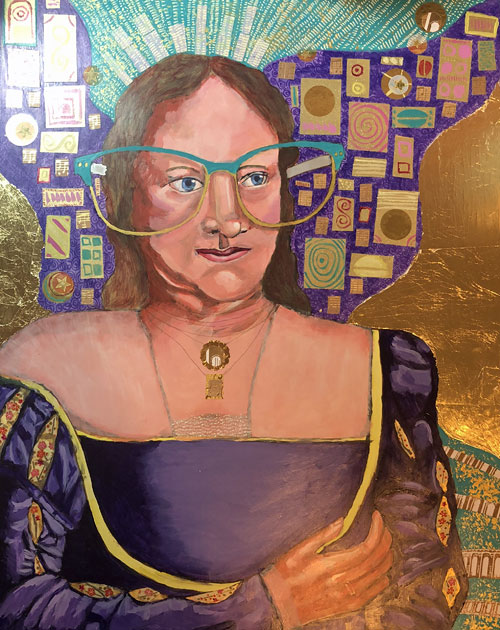 Then used a fine brush and paint to make marks over the squares etc. Most of which I ended up not liking.  I also used the odds and ends of the larger gold leaf pieces brushed off the initial gold leaf stage (sweep the bitses and keep them in a glass jar), for the cords around the bodice and the necklaces, the ring on her finger and to touch up areas that didn't take. I used iridescent gold fluid acrylic for the "tree" in the bodice and various gold pens for patching and detailing. 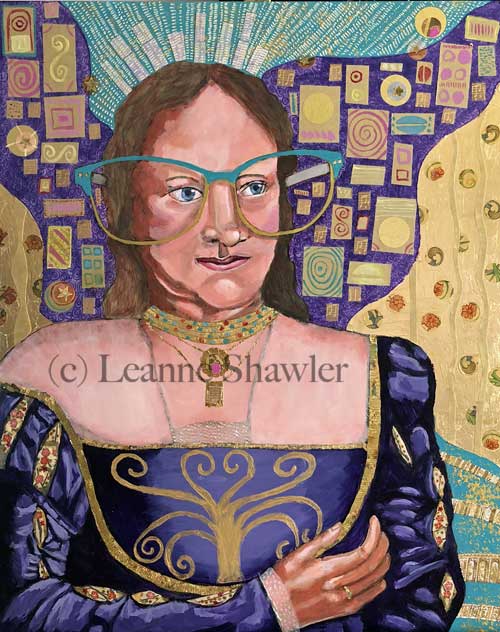 A close up of the detail work before the 3D paint went on. 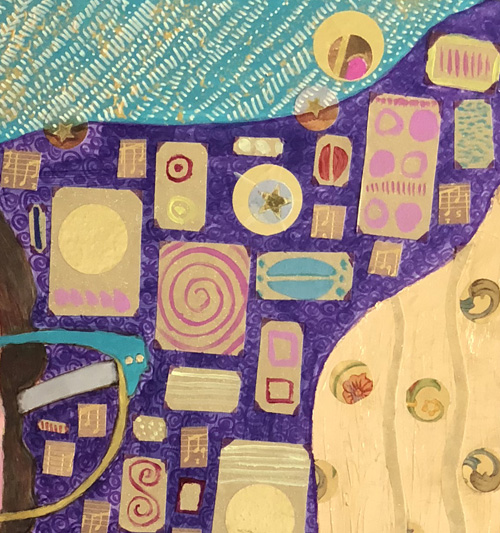 Ivy had shared these 3D paints by Pebeo (Cerne relief outliner) she was using in her Klimt-inspired work, so I had to wait for my order to come in. And then I went a bit nuts, but at least the purple area is at a place that I like.

Same area with the 3D paints: 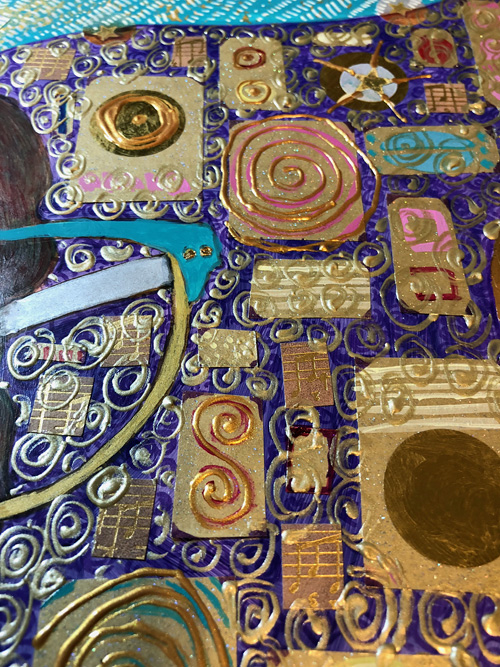 I finished it on the 22nd. That's 20 days (but with some days off waiting here and there for various reasons.) Here is the final picture. It's from a photo as it stands on my easel at night, so perhaps not the best view, but gold is tricky to capture.

Now I have to figure out who Number 31 might be the one that's currently on a large canvas or I may do a smaller one in my 52 Portraits journal. We'll see...
#52portraits52weeks