This one was inspired by a Facebook post sharing the story of a woman's skull with a golden orb embedded in her eye socket. It's the oldest artificial eye ever found. It's 5,000 years old. The woman was six foot tall.

Well, this provoked a response in me -- an old one -- the impulse to take a snippet of history and make a whole novel out of it. In the end, an outline of her story was written into her hair.

The painting started with some white gesso to strengthen the paper as it had been torn, and then I had some left over gold gesso on a brush as I had painted the sides of my Mary Magdalene painting. Then a pencil sketch: 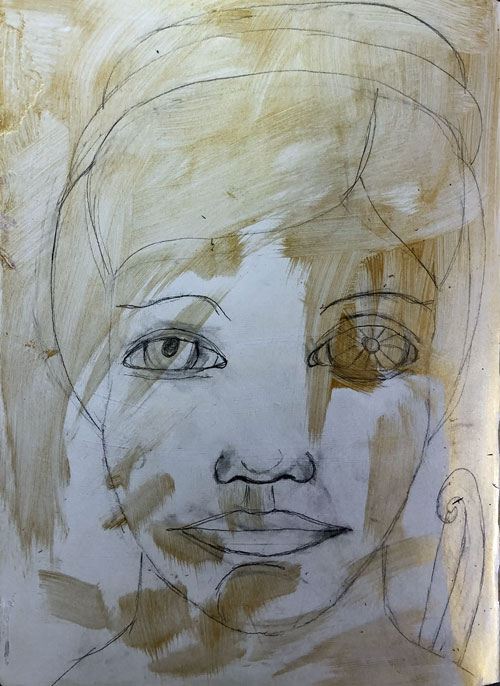 I started out with Jane Davenport's Matchmaker paint, using the darkest tones initially, and Titanium white for the highlights. 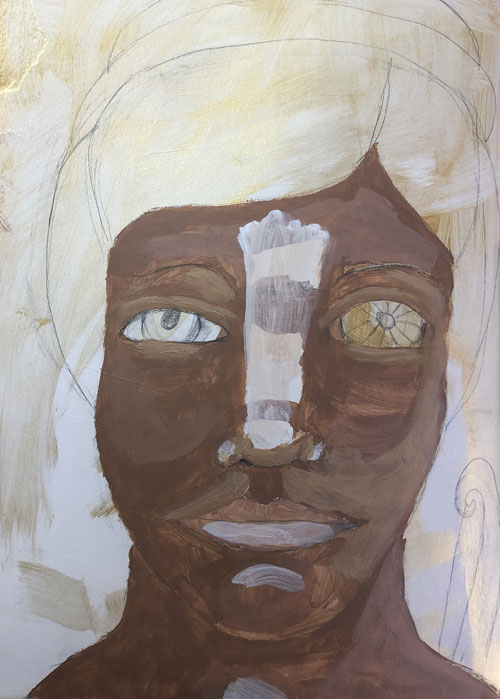 I added another shade of the Matchmaker paint and a lot of Golden Fluid Acrylic in Raw Sienna, and more white, and some Quidacridone Red, also in Golden Fluid. 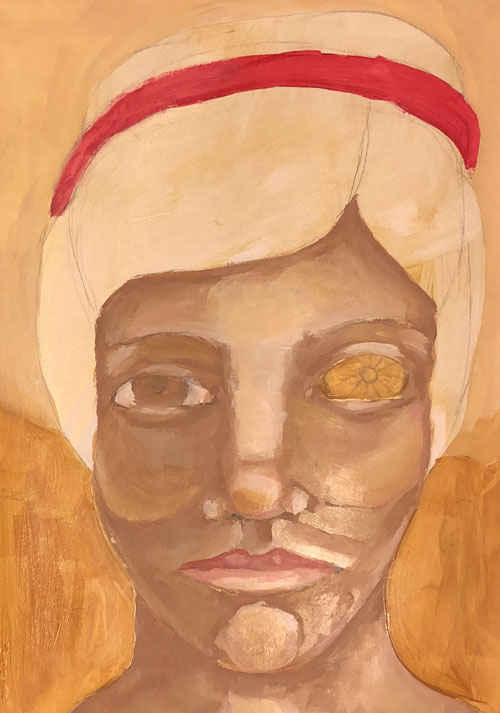 Tried out a desert background of raw sienna (some mixed with white) but ultimately I needed her to pop more, so I used Jane Davenport's dark blue paint for a matte background. I think I was thinking of adding stars and swirls but, you know, she has a star in her eye. Some of that raw sienna is still a bit visible in her bow. (A hint to her backstory.)

At this point, the photo taking stopped happening and I started throwing everything at her to increase the values of shadows and light. Faber Castell Pitt pens in various hues (black most noticably) but also in and around her golden eye. Even a couple of Copic alcohol markers (I only own two) and some Blick Studio markers (that turned out to be the wrong shade so got covered up.)

If I had to do her again, I would do a full greyscale painting of her eye, because the Autumn Gold ink I laid over it is translucent. Not that that was the only gold I used. Not just the gold gesso underneath, but also gold gelly roll pens. White pens from Jane Davenport's line provided highlights.

Her story was written into her hair with a Faber Castell Pitt pen in black, with sepia Golden Flow acrylic over her hair. Then I used Jane Davenport's Ultimate pen in Suede (it's a dark brown) to draw her hair. Then she got a new bandana with some Posca gold pen dots and then dimensional dots in King Gold in Pebeo Cerne Relife paint. 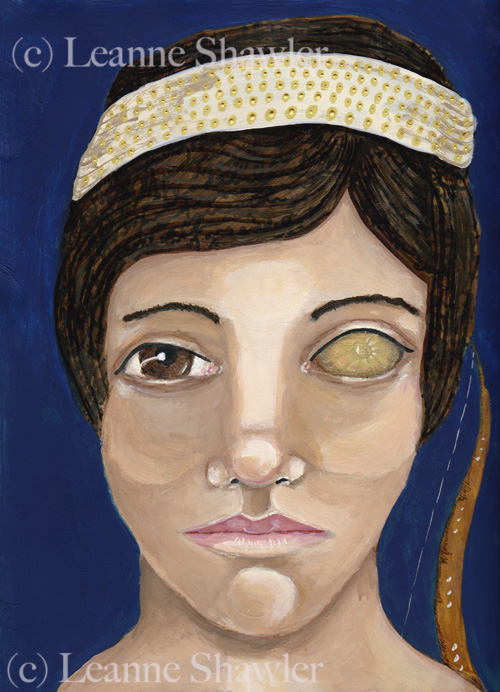 And if she looks a little fierce that's because her story has been a hard one, a terrifying one. But she hasn't surrendered, she stands tall. She is an oracle, a leader in her community. Her golden eye may cause her pain, but it is a symbol of hope for her people.

We too can be symbols of hope. We can stand up and speak out against hate. We can reach out and really get to know those we consider "Other" and find that we are all just people who love and make mistakes and do good things.
#52portraits52weeks