This art is flawed, imperfect, and doesn’t come near to what I had in my head, and it was my head from a month ago. If it exposes white bias, well, I will accept all noticing with humility, but acknowledging you’re under no obligation to do so. I know I have more work to do. I am learning more to do better.

It was the second week of protests when I started this piece and I finished it around June 11. And then I sat on it because we were amplifying melanated voices and it wasn’t my time. I delayed longer because it felt like centering my white voice and this isn’t about me except in how I take action. Also, it’s personal processing. I’d been taking slow steps to learn more about racism (consistently studying it since late November) and then George Floyd and I really woke up along with many many others.

I’m an artist, so an art challenge on mermaids and whales spurred me to process what I’ve been absorbing. 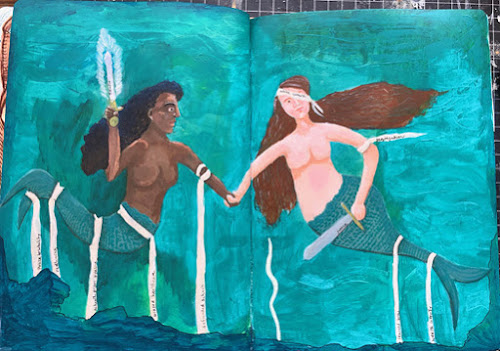 Two mermaids, one black, one white. I tried many ways as to how they should appear on the page for quite a while and left them kind of unmermaid-like but approximately level. The black mermaid holds up the sword of truth (that she’s been holding up for a long while) and looks at the white mermaid, whose “white culture” blindfold has slipped, but isn’t off completely (will it ever be off completely?) She has a sword of justice, to break the bonds of white supremacy. I tried to position that sword so it didn’t look like she was attacking the black mermaid but dealing with the bonds that are holding them down. Hence, her sword is pointed down. 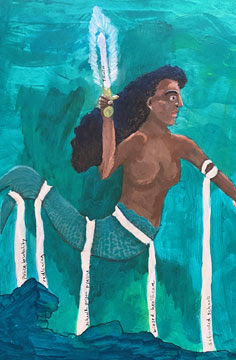 Now this didn’t quite come across, because (a) I’mnot that great at illustration without references and (b) portraying black pain just felt very very wrong given I was creating this at a time of so much pain already and didn’t want to add to it, but the white bonds tug harder on the black mermaid. The white mermaid isn’t fully aware yet of all the ways white supremacy holds her down. Once white supremacy is gone, both black and white will be free. On the bonds I wrote some of the various aspects of white supremacy: school to prison pipeline, biased healthcare and so on.

Since I’ve painted this I would add the characteristics of white supremacy that I recently learned about (such as perfectionism) and maybe I wouldn’t have the bond of segregation completely cut free as it still occurs in housing and school systems.

There is an unnamed white grasping thing that hasn’t reached anybody yet. My first thought was to leave it blank for all the ways I don’t yet know about, but now I am wondering if it’s a new way that white supremacy can reel us back in… 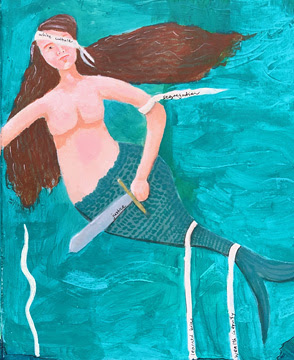 So this was my process a month ago. I just finished another painting and will share that soon.