I finished this painting and wrote the following before the latest witnessing of the deadly evils of racism in this country. There was no mercy, there was no justice, and I thought, how could I post this? So with that heaviness in my heart, I share the following, with the hope that when we remove the chains of racism from white hearts and BIPOC bodies, all of us will experience the relief and release of Divine mercy. May it be. 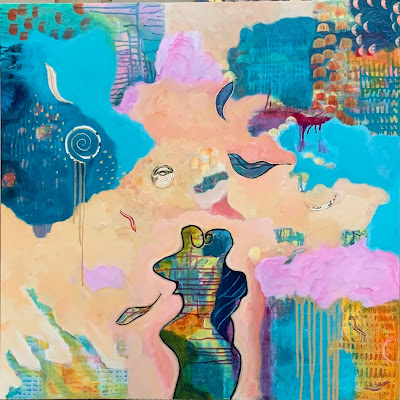 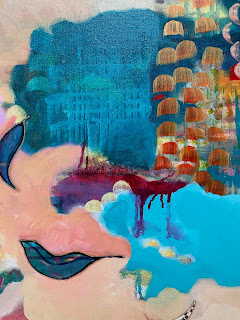 I did not expect mercy to look this way. But as I grew closer to finishing the painting, I realized that mercy was more than I knew.

But let me start at the beginning.

When the pandemic started gaining ground in the United States, I continued to paint. The first painting I completed was a massive prayer to be saved from COVID-19. To be honest, it began really as a prayer for me and mine to be saved from the virus. But as I wrote my prayers across the canvas, it extended to everyone.

As the painting continued, I invited and included prayers from other people including hidden words of prayer in the very last stage.

So my first pandemic painting was full of fear and hope. You see a petitioner asking an angel for deliverance and a healing green light, Viriditas, bathing the angel, and one hopes the petitioner. Things are still a bit dark.

My second pandemic painting (which I actually finished in the middle of working on the first one) was about not being able to sing because that would spread the virus. 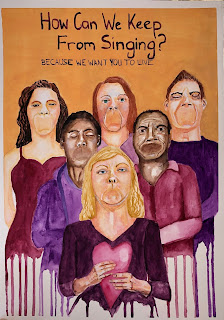 I begin my third pandemic painting with the leftover paint from the first one and on it I wrote words from a hymn asking for mercy: I wrote it until I filled the canvas in at least four different directions.

I thought mercy was asking for it. But I was wrong.

The painting took on a very abstract quality as I reached for colors that felt like mercy and as I made marks and scraped paint across the canvas. Although I put together a playlist, I either worked in silence occasionally singing along myself or to a completely random song list in addition to the playlist. I became lost in the flow of the painting, watching colors drip, merge, contrast.

The final images emerged. Eucalyptus leaves, both stamped and drawn, appeared as symbols of resilience. (Eucalyptus trees regenerate after a cataclysmic fire.) Gold drips and outlines in a sign of divinity present everywhere. 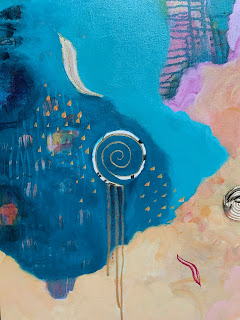 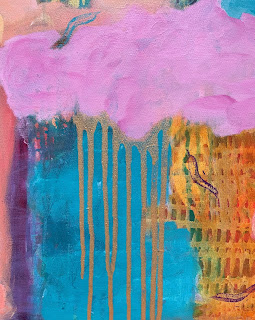 In the center, surrounded by pastel clouds of light and wild hope and joy, are two abstract figures merging into one. It is God and soul becoming one. This is mercy. It is God becoming one with us. We are surrounded by God’s embrace from the heavens to the very foot of the earth. 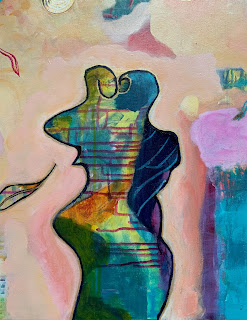